YOUR OPPORTUNITY TO REPRESENT AUSTRALIA AT THE FIA MOTORSPORT GAMES 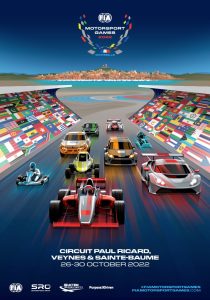 Karting will have a vastly increased presence at the FIA Motorsport Games when the second edition of the unique multi-discipline global competition is staged at the Paul Ricard circuit in France, 26-30 October.

As a result, Karting Australia is opening applications for two young drivers to represent their country at the games.

The Sprint Karting element is split into two medal-winning categories of Junior and Senior competition. The Junior category opens the Games up to competitors aged 11-14 years with an FIA International Grade G licence.

The Senior competition, for drivers aged 14+ years, will feature three 15km qualifying heats ahead of the 30km final race to decide the winning nation.

All drivers will use identical equipment – a Kart Republic chassis and IAME engine, with the entry fee also including pit space, fuel and single supply tyres.

“Like so many drivers, I learnt my craft in karting. I would have jumped at the chance to represent my country and compete on the global stage of the FIA Motorsport Games,” Felipe Massa, former Formula 1 driver and President of the FIA Drivers’ Commission.

“Thanks to the two new karting disciplines joining the 2022 Games this October, more young drivers will get the chance to have that experience and to showcase their talent. That’s really important because karting is the proving ground for so many forms of motorsport.”

Karting Australia Chief Executive Officer Kelvin O’Reilly believes that the Motorsport Games is a great platform for a pair of Australians to shine on the world stage.

“The FIA Motorosport Games is a unique concept and one that has significant potential for years to come.  It’s great to see sprint karting incorporated into the roster for this year’s event,” said O’Reilly.

“It is a once in a lifetime opportunity for two young drivers to be able to represent their country alongside other members of the Australia team that will be competing in other disciplines.”

Karting Australia drivers can register their interest in the event by completing the application form here.  Applications close Friday August 5.  The successful drivers will be announced in mid August.

Further information on the FIA Motorsport Games can be found at www.fiamotorsportgames.com