WORLD KARTING ICON RETURNING TO THE RACE OF STARS 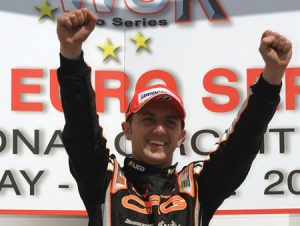 Italian Davide Fore is making a return to the Race of Stars on the Gold Coast later this month.

Five-times World Champion Davide Forè will make a return to Australia’s Gold Coast to compete in the 2019 Race of Stars later this month (October 17-19).

With a resume that eclipses that of any current karting driver across the globe, Forè will be making his fifth start at Australia’s most prestigious stand-alone karting event being contested at the Xtreme Karting Complex.

The Italian was James Courtney’s team-mate when the 2010 Supercars Champion was victorious at the World Karting Championship in 1995 and 1997.

Now, almost 25 years later, the pair will be joining forces once again with Forè set to pilot an Australian-designed JC Kart on the Gold Coast with Courtney’s former mentor Jon Targett as his mechanic.

JC Kart is a joint venture between Courtney and Targett formed in 2015 that sees Courtney involved with the sport that provided him with so many opportunities during his formative years.

“Having my own brand of kart means a lot to me, it’s great seeing all of the kids coming through the ranks and enjoying the sport of karting like I did with my family. To have Davide join our team for the Race of Stars is something that I’m really excited about,” said Courtney.

“There’s no bigger name in the world of karting, there’s not many major events that he hasn’t won and he’s a fantastic ambassador for the sport of karting.” 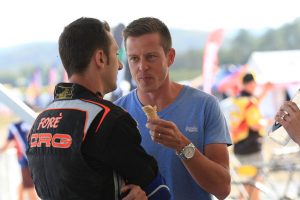 Forè (pictured here with James Courtney) will compete aboard a JC Kart at the event. (Pic: Coopers Photography)

Forè, who became the first back-to-back winner of the Race of Stars in 2014 and 2015, is excited about heading back to Australia to chase a third winner’s surfboard.

“Australia holds a special place in my heart.   I first raced there during the mid nineties in Coffs Harbour and after making a number of trips over the past five years I’ve met some great people and can’t wait to see everyone again,” said Forè.

“Teaming up with James is something that I’m really looking forward to. We’ve known each other for more than 20 years and to be able to compete aboard a kart designed by him and Jon is a real honour.”

Forè will be joined on the grid in the KZ2 class at the event, where drivers will exceed 160 km/h around the 1690-metre circuit, by 12-time French Champion, and reigning Race of Stars winner Anthony Abbasse, Singaporian teenager Jaiden Jin, New Zealand Champions Matthew Payne and Matthew Kinsman, along with Australia’s best headed by former National Champions Chris Hays and Aaron Cameron.

In total, more than 200 drivers will take to the circuit in seven classes ranging from the youngest 45 drivers in the Cadet 12 field through to the elite KZ2 class.

The Race of Stars will launch the Gold Coast into a ten-day celebration of motorsports with the Vodafone Gold Coast 600 Supercars event being contested on the Surfers Paradise Street Circuit the following weekend.