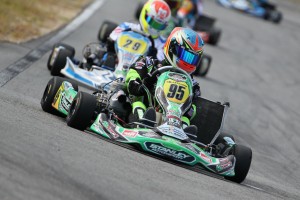 The 5th and final round of the FMA Motorsports WA KZ Series was held at Wanneroo Raceway over the weekend.

Qualifying was close! During practice the night before 3 or 4 guys where under the lap record. The cool air and track making for perfect conditions. This wasn’t the case Saturday morning, but the drivers still had cracking pace. Jake Klarich setting an Pole Time of 45.77 only just pipping Hayden Patrizi who did 45.78. Patrizi had world class KZ Driver Marjin Kremers on the spanners and helping with set up and it seemed to pay off! Amrit Kandola is always quick, he was 3rd with 45.84. The other Championship contender BD Soutar-Dawson was 5th with a 45.94 making his chances that little bit harder. Currey came home 4th.

Heat 1 was intense! Klarich had a bad start but a freight train of karts had formed behind. This allowed him to gap himself from the rest of the field. There was action everywhere though and was hard to know where to look. Drivers where loosing 3 spots in 1 corner. Currey and Patrizi succumbed to the action and got pushed well back. BD also getting pushed back but was able to salvage his race at the end getting back to 6th.  The big movers however was Simon Gwilliam who got up to 2nd spot. Rookie Contender Jesse Elliott had a blinding start and was up into 2nd by lap 3, he was however pushed back after fighting with Joshua Merritt as Gwilliam forced his way past both drivers. Aaron Grossman also had an impressive drive to get 4th. 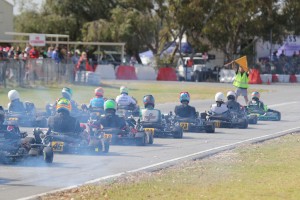 The KZ field set for a start

Hayden Patrizi got the jump in heat 2 and he lead for the first lap. Not content with this though Klarich made the move into the lead as soon as he could and by lap 2 was out in front. Although it wasn’t as action packed as heat 1 there was one accident that had major impact on the Series result. BD and Currey came together when BD tried to make his way past. BD unfortunately spun in the process and stopped. Of course this now gave Klarich the breathing room he needed to relax a bit more. Klarich home 1st followed by Patrizi in 2ndwhich was his best result and Rookie Jesse Elliott 3rd.

Elliott had a blinding start in the Pre Final. Getting out to an early lead. Klarich continued his run of bad starts and was pushed back to 3rd with Joshua Merritt in 2nd. Klarich however showed why he is the Best KZ driver in the country at this moment. Picking his way back through the field with some great passing. And by lap 6 was back in the lead. Jesse Elliott held on to 2ndand Gwilliam having a good battle for 3rd with Daniel Currey. Gwilliam taking the honours with 2 laps to go.

The Final was filled with drama! A turn 1 roll over at the start involving Ben Johnson caused a full course yellow. Ben was upside down for a while as the officials scrambled to see if the race should be red flagged. Ben emerged though, very sore. He later went to hospital and was cleared of any major damage. Full Course yellow though was something most kart drivers would ever see. Jesse Elliott who was in front at the time slowed as he went past the accident and could see the roll over. Many drivers however decided once they had past yellow controlled section of the track they would go back to race pace. In the confusion Simon Gwilliam came out in front. Klarich went to 2nd and Patrizi went to 3rd. Elliott unfortunately went to 7th and was unable to make his way back up the tough field.

Gwilliam was unable to keep Klarich at bay and by lap 6 was put back into 2nd spot. Klarich would then drive away with the round win, also locking in his 2nd Series Championship in a row. The first to do so. Gwilliam held onto his 2nd spot with Dan Currey 3rd Hayden Patrizi sneaking home 4th after battling away with Amrit Kandola.

Quotes:
Simon Gwilliam
“I wasn’t very happy with my qualifying effort of 6th i thought i over-drove the kart on my hot laps. Heat 1 was ‘sick’, I was back in 10th after a shocker first lap and came back through to finish 2nd.
The 2nd heat i got involved in an accident on lap 1 and it was all over.
Pre final played out well and i got up to 3rd to give myself a chance at the night final.
In the Final i was sitting 3rd on lap 2 when a rare full course yellow came out.  Jesse who was leading slowed right up and karts were going all out of position. I don’t really know why but i decided to gas it up before i should have and i went into the lead. I apologies to Jesse as he didn’t deserve to loose the lead like that and i think he lost a heap of places in the process.  I just don’t understand why he slowed up so much. Anyhow i lead for a few laps until the inevitable pass came from klarich and off he went.  After the race i was lucky to get away without a penalty.
I Would like to thank FMA Motorsport for all that they do for me and Grassy my mechanic, as well as Ron for his help.  Also Paul Williams for your great service to this class for the last 4 years. Champion.”

Daniel Currey
“Great year of racing. Final round was a good enough result to clinch 3rd outright for the series, I was happy with that.
We had good pace from Friday practice right through to the final. Qualified 4th. Had a shocker in the first heat finishing almost last in all the hustle and bustle. Not a bad run in heat 2 with a 5th which put me out of grid 6 for the prefinal. Made my way through to 4th in the 15 lap race with a little bit of pace to find. A few minor changes to the kart and it was good enough to get me through for a podium finish in 3rd. Great result to finish off the year. Well done to Gumby and Klarich and thanks for the great racing from all the KZ competitors.
With a few ups and downs for the year We still ended up 3rd outright with a lot of fun along the way.
Can’t wait for next year.”

Jesse Elliott
“What year 2015 was, full of ups and downs!
KZ in WA is a Very competitive series and to be up the front take lots of practice and time in the seat to meet some high levels of competition.
Had a rough first few races being in the wrong spot at wrong time as a lot of other drivers also experienced, but on the other hand had a pretty successful end half of the year, getting our head around the KZ basics, producing the qualifying and racing results.
Big thanks to Klarich for all the help through the year, tuition and motor advice, Kart-Magic also big thanks Mike Sully from Tony Kart for all he’s help and I cant thank the old man enough for doing all he does and all the unseen hours put in.”

Jake Klarich
“This year has been a very successful one for us, we took on a new brand of kart (TB Kart), and driving for Stanley Motorsport. So to come away at the end of the season with our second WA KZ title, we are over the moon.
Our season has had it’s ups and downs but we have had great success at every round this season, taking out the round win 4 times, the whole package provided by Stanley Motorsport has been awesome not only in WA, but on the east coast as well.
A huge thank you to the team firstly for all of the hard work they’ve put into me this season, TB Kart, Super Rooster, A&R Klarich Transport, Performance Racegear, Sparco, Hanssen Racing Engines and the support from my family! Also a massive thanks to the committee and the sponsors of the FMA WA KZ Series which has once again been very successful and fun to race! Thanks to all of the competitors for the awesome racing this season.”

BD Soutar-Dawson
“2015 was a great year. Shifting over to the new Arrow KZ chassis, I felt, was a good step forward in consistency for me. Having limited seat time, due to work, and missing one round it was going to be tough to beat Jake. He has been driving really well and has put in some serious effort.
This shows with him currently leading the Australia Champs, with one round to go. It is great to see the competition really heat up this year in the WA series, every round was close, with tight battles from the front to the back. It was a good fight with Jake all year, with points being tight right to the last round. I didn’t put together the perfect round that I needed, with a heat 2 DNF. I’m stoked to be a part of the series and still very happy to fight for the series lead and bring home 2nd place behind Jake. I wish him well for Geelong this weekend. Being part of the KZ WA committee has been very rewarding as well, to help grow the series from behind the scenes along with the hard work from Paul Williams and Andrew Freeman. Thank you to each and every sponsor of the individual rounds and the series as a whole. Also a very big thank you to my sponsors, Flatout Karts, DPE Kart Technology, B-Sport and Mills Drainage. Bring on 2016.

The WA KZ Series will be back next year. bigger and better. if you wish to race, sponsor or be involved please contact wakzseries@gmail.com