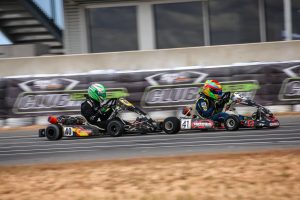 Designed for the Club-level racer, all Club level classes will be offered at the Ultimate Club Racer II. (Pic: Pace Images)

The second edition of the Ultimate Club Racer event will be hosted by the Go-Kart Club of South Australia at the Monarto Karting Complex, just outside of Murray Bridge on November 4-6.

Designed for the Club-level racer, all Club level classes will be offered at the event – which will see thousands of dollars of prizes up for grabs across the various classes.

“Ultimate Club Racer I was a great event. It was all about having fun and racing with your friends” said Karting Australia Chief Operating Officer Lee Hanatschek.

“Then COVID hit but now it’s time do it again. It’s at the start of the end of year special events – serious racing with some events that are just for fun.”

To be eligible to compete at the Ultimate Club Racer II, Drivers must have competed in at least three Club, Zonal or State Level Meetings (does not include a State Championship event) in their home state prior to Friday October 14.

Unless otherwise approved by Karting Australia, Drivers who have finished on the podium at a round of the Australian Kart Championship in the last two years are not eligible to compete at the event in that Class, or  a Class that has a lower performance level than that in which they finished on the podium. (e.g. if you have had a podium finish in KA3 Senior at AKC, you are not permitted to enter either the KA3 Class at Ultimate Club Racer II but you are eligible to enter TaG 125 and so on.)

“Along with the great accommodation that is available in Murray Bridge, we’ll be having a dedicated camping area and hosting a dinner at the track on the Saturday night so that everyone can enjoy a Party style atmosphere.”

The winner of each class will receive the honour of wearing the silver number plate for the next 12 months following the event.

Supplementary Regulations and the race format will be finalised in the coming weeks.