Live Streaming of the racing on Saturday and Sunday at www.watchmysportlive.tv 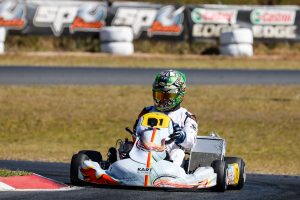 Josh Fife in action during the previous round of the Championship in Emerald (Pic: Pace Images)

This weekend’s final round of the 2022 SP Tools Australian Kart Championship presented by Castrol EDGE in Newcastle will see a three-way fight for the top crown in Australian karting.

Canberra’s Josh Fife, Victorian Jay Coul and Western Australian Sam Dicker are set to dice it out for the number one spot in the KZ2 category.

Fife, who was victorious in the 2017 Championship, was dominant at the previous round in Emerald last month to cement his place at the top of the standings, however, Coul’s consistency has the Parolin driver a mere 18 points adrift of the Tom Williamson Motorsport driver entering the final round.

After missing the opening round due to COVID restrictions, Dicker rocketed into Championship contention at Round Three following a comprehensive victory.  With Driver’s being able to ‘drop’ their worst points scoring round, Dicker is in contention to become the first Western Australian to be crowned Champion of Australia’s elite Gearbox category.

“The Championship is very close between the three of us.  I’m going into the round like I treat every other round, aim for the win and let the points take care of themselves,” said Fife, who was victorious at the corresponding round in 2018.

“With the Championship points the way they are, a strong run in the heats is just as important as the final, so I’ve got to aim to make minimal mistakes all weekend long.

“The Newcastle circuit is probably the toughest track we go to in the Championship.  It’s unique and very physical on the body.  Everyone will be tested this weekend.” 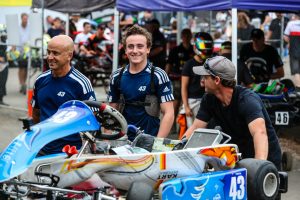 The elite Junior category – KA2, five teenagers are in with a shot at the title.  Goulburn’s Costa Toparis leads the way in the standings ahead of Victorian Peter Bouzinelos and Sydneysider Jake Rutkowski.  Lewis Francis and Toby Dvorak are both also in with a mathematical chance at snaring the crown should results and luck be on their side.

Parolin youngster Sebastian Eskandari-Marandi enters the weekend as the Champion-elect in the Cadet 12 category, while Tasmanian Cruz Kelly has wrapped up the title for the youngest drivers in the Cadet 9 class.

Melbourne Kart Centre driver Brad Jenner will need to chase down CXR Racing’s Jace Matthews to claim a third consecutive X30 title, while Matthews is also in the box seat to secure the KA3 Senior title.

Shamick Racing’s Leigh Nicoloau will be out to break a 16 year drought in the TaG 125 class.  Having been victorious in the stand-alone National Championships as a Junior, and while he enters the weekend as the Championship leader, he’ll have to fend off the charge of Tom Williamson Motorsport Zac Heard to claim the title.

Practice for the event begins on Friday ahead of qualifying and the heat races on Saturday.  The finals will be contested throughout Sunday before the Champions will be crowned at the Gala Awards Dinner held at the Newcastle Exhibition and Conference Centre on Sunday evening.

All of the racing from Saturday and Sunday will be live streamed on www.watchmysportlive.tv