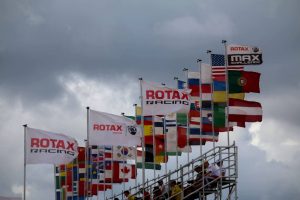 Team Australia Captain Ryan Kennedy has finished the last full day of practice at the 2018 Rotax Max Challenge Grand Finals atop the timesheets in DD2 after some mixed weather running in Brazil.

The Queenslander now goes into tomorrow’s final practice session confident of a strong result. Kennedy praised the Brazilian track likening it to the tracks back in Australia and feels that his fourth appearance at the event could be his best yet.

In the Junior MAX category, Jaiden Pope again led the charge finishing the day inside the top five while teammate William Seal improved on his time set yesterday.

Micro MAX Competitor Jake Rutkowski continued to show maturity as he worked his way inside the top ten today leaving him confident going into qualifying tomorrow.

All Competitors have one last practice session before qualifying tomorrow followed by the first round of heats.