ROTAX DD2
In Rotax DD2 – Sydney-based driver Nathan Tigani has won two of the three heats today. Tigani admitted this afternoon that the damp conditions that greeted drivers at Lincoln County Raceway caught him out, however he was clearly the fastest in the final two heats this afternoon. Captain of the Australian team for the World Challenge, Troy Woolston has been solid throughout the day and is keeping Tigani under pressure, so too Lee Mitchener, Joshua Car and pole-sitter James Foster – all of whom are in with a strong chance come tomorrow’s final. 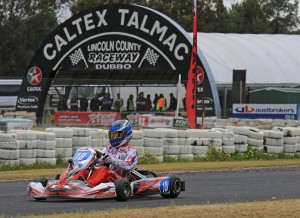 JUNIOR MAX
Junior Max has proven to be its typical unpredictable self. Three of the top four positions on the grid were occupied by World Final participants – Kiwi Matthew Payne (New Zealand representative), Cody Brewczynski and Dylan Hollis.

Since Payne’s pole time, it has been wide open. Brewczynski bookended the day with heat race wins, however the race of the day in any class was the second heat. It fell the way of Victorian, Hollis after a heat one DNF. Any one of eight competitors were in line to win the race, however it was Hollis who got the best of them. Ironically, it was the jostling for minor positions on lap one involving Payne and Hollis that opened the third heat up for Brewcyznski to establish his unbeatable advantage. Others to impress included Kyle Bonser who wasn’t out of the top five and NZ-based lady racer Rianna O’Meara Hunt who was a regular feature of the top 10 fights.

ROTAX 125 LIGHT
Tom Williamson Motorsport Kosmic drivers and Team Australia representatives, Joshua Fife and Cody Gillis are locked in a supremacy battle in Rotax Light. The pair have had a speed advantage over the field during the heat races with Fife setting pole and winning two races and Gillis winning the other with Fife second. The battle behind that is involving a number of drivers. Despite all that, Wayne Bourke took his Tony Kart to a pair of thirds with Thomas MacDonald taking the other. Paul Rodgers, Matt Lopino, Liam Ford and Jordan Pike are others to impress on occasion. 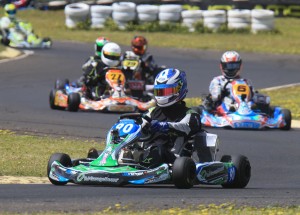 DD2 MASTERS
Team Australia representative Lee Mitchener has been the pace-setter throughout the early stages of DD2 Masters throughout the day, although the Formula K pilot has had an unlikely adversary emerge in the final heat today in the form of CompKart Australia’s Kris Walton. Walton was determined to reign in Mitchener’s unbeaten streak in heat three this afternoon. Having qualified 14th, Walton was up against it, but pushed his way to the front and left it until four corners from home to make a decisive move to lead and then win the race, thus building a phenomenal finish to the season tomorrow.

ROTAX 125 HEAVY
Chris Farkas is a man on a mission this weekend. Setting the pole position, his opening heat was one of the final classes before a true dry track became evident. He was caught out heading into turn one on a damp patch, which sent him back in the field, seeing him come through to finish the first heat in seventh, Joshua Davey taking the win. Since then, the Queenslander and defending Champion of the class has made amends and hasn’t looked like being beaten.

Fellow Queensland Rotax Pro Tour stalwart, Clem O’Mara has been typically strong finishing second in the final two heats of the day, Kris Walton grabbing the runner-up spot in the opening heat. The minors are being hotly contested between Davey, O’Mara, Walton and Benjamin Richie with Shay Mayes – who will represent Australia at the Rotax US Open in Las Vegas – sitting just outside the top five.

MINI MAX
Victorian Praga driver, Hugh Barter is set to board his flight to Italy with confidence after a great run throughout the Mini Max heats today. The young star set the pole position then won two of the races, however there was no sense of dominance from Barter. Shamick Racing CRG’s James Wharton (a Team Australia representative) won the second heat and his season long rivalry with Shamick CRG stablemate Kai Allen continued this afternoon. Allen is by no means out of contention, not outside the top four in each of the races, nor front row starter, Will Harper or Jack Westbury – with several others nipping at their heels.

JUNIOR MAX TROPHY
Taylor Hazard has shown rare dominance today taking all three heat races in the Junior Max Trophy class. Hazard hasn’t had it easy – in the first race, another ‘Taylah’ – of the female variety in Taylah Agius pushed him all the way – and from there it has been Zayd Tones the most likely to upset Hazard’s applecart. The field has been tightly bunched throughout the course of each race and whilst Hazard has scored the race wins, by no means is it cut and dried. Russell Mayo has secured a pair of third placings and Aron Shields has been domiciled in the top five and is one of those likely to throw a challenge during the longer pre-finals and finals tomorrow.

MICRO MAX
Much like Junior Max Trophy, Micro Max has seen only one driver cross the finish line first. Sebastian Ruiz – who is set to become Australia’s youngest ever competitor at the Rotax Max World Challenge next month hasn’t looked like being headed during the course of racing. During qualifying – when the track was damp after overnight rain – New Zealander Emerson Vincent established the pole time. Vincent wasn’t able to go with Ruiz during the course of racing, however Victorian, Harry Arnett could be a threat tomorrow. After a poor qualifying, Arnett will start the pre-final on the pole and showed enough during racing to indicate he could be a difficult opponent to Ruiz.

FINALS LIVESTREAM AND UPDATES
The Rotax Pro Tour Grand Finals will be livestreamed on www.rotax.com.au/streaming.html and updates throughout the day published on the Rotax Pro Tour Facebook page at www.facebook.com/rotaxprotour