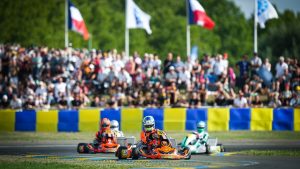 The CRG driver got the better of a race-long battle with his countryman, and reigning World Champion, Noah Milell, who crossed the line less than two-tenths of a second behind the winner.  2020 World Champion Jérémy Iglesias rounded out the podium to make it a pair of CRG pilots inside the top three.

In the FIA Karting World Cup – KZ2 it was also a CRG driver who claimed the victory with Frenchman Arthur Corbonnel claiming a dominant victory over Cristian Bertuca.  British driver Arvid Lindblad rounded out the podium.

Oscar Targett put in a sterling drive in the Super Heat to secure a spot in the final to start from position 33.  He then charged his way forward to claim 20th position in the final classification.

Victorian Henry Johnstone was classified 76th in the Intermediate Classification, one spot behind Australian Kart Championship regular Nathan Crang, after the heats and didn’t make the transfer into the Super Heat stage.

In the FIA Karting International Super Cup Masters – KZ2 it was Sodikart driver Thomas Letailleur who was victorious in his Sodi Kart.  Australian Michael Patrizi narrowly missed the transfer into the final by a solitary place after a mechanical issue in his third heat forced him out of the race.

In the FIA Karting Academy Trophy, Arthuer Dorison started the final from 12th place before storming his way to the front and claim the title.  Australian Harry Arnett was unfortunately a non-starter for the weekend due to Travel complications.

For the full results https://www.fiakarting.com/event/2022-le-mans/guide