All of the racing on Saturday and Sunday will be live streamed on www.watchmysportlive.tv 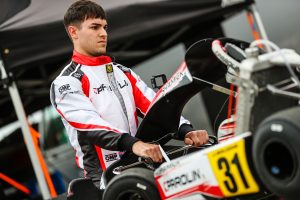 This weekend’s penultimate round of the 2022 SP Tools Australian Kart Championship presented by Castrol EDGE in Emerald, Queensland will have a Supercars flavour about it.

Fresh from returning to the Supercars Championship with PremiAir Racing last weekend in Townsville, James Golding will line up in the elite KZ2 (Gearbox) category while Tickford Racing’s Jake Kostecki will compete in the single-speed X30 class.

Golding is no stranger to the Australian Kart Championship paddock having been a regular competitor over the past few years.  After finishing on the podium in the previous two rounds, he currently sits third in the overall standings.

Driving aboard a Parolin chassis, Golding will be one of the favourites on the fast-flowing Emerald circuit this weekend.  He will however face tough opposition from the likes of last round winner Sam Dicker from Western Australia, Championship leader Jay Coul and former Australian Champions Josh Fife and Troy Loeskow – among others in the 36-strong field.

“The racing is intense and everything happens so quickly when you’re in a KZ kart which helps me with my other racing.

“There’s so much talent around in Australian karting, from the kids in the Cadet classes right through to the KZ2 class, they are great events to not only compete at but also watch some of the youngsters coming through.”

For Kostecki, it is somewhat of a homecoming for him having spent much of his formative years travelling from his native Western Australia to compete in National-level karting events across the Country.

He will be joined by his brother Kurt at the event, who will act as his mechanic, while his younger brother Jay will also be competing in the Cadet 9 class for 7-9 year olds.  The youngest Kostecki is fresh off a victory last weekend in the NT Kart Championship in Darwin.

In total, there will be close to 300 competitors in action across eight classes at the event with practice being contested on Friday ahead of qualifying and heat races on Saturday.  The final round of heats and the finals will be contested on Sunday.

All of the action on Saturday and Sunday will be live streamed and available on www.watchmysportlive.tv

The Emerald Karting Club is located on the Capricorn Highway, 10 minutes of the town centre.  Admission is free for spectators.