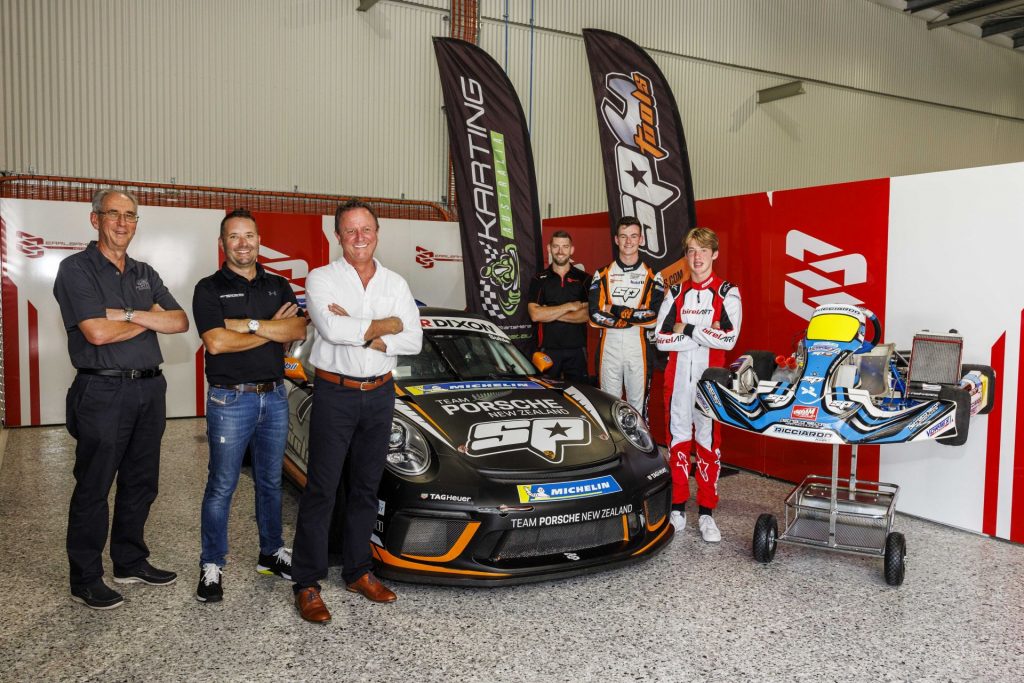 SP Tools is pleased to announce a pathway program that bridges the gap for young talented drivers making the transition from karting to the country’s top-level Porsche categories and competition.

SP Tools has partnered with the Patrizicorse Kart Team and the Earl Bamber Motorsport Team to enable the best young karters a pathway into the Porsche Michelin Sprint Challenge Series and onto Porsche Paynter Dixon Carrera Cup Australia Championship, as they ascend the Porsche Motorsport Pyramid.

“After more than 30 years of sponsoring Australian motorsport at the highest levels, we are looking forward to increasing our involvement at the grass roots level,” said SP Tools Executive Chairman Kevin Davis.

“Over the years we have watched many young drivers struggle to find their way into a professional drive. If this collaboration enables a few to make their mark on the world of motorsport, it will be a legacy SP will be proud of.”

The SP Tools program is designed to guide the scouted talent within the Patrizicorse Australian Kart Championship Team to a partially funded seat in the SP Tools Racing Porsche 911 GT3 Cup cars run by Earl Bamber Motorsport. The drivers will then have the support needed to ascend Porsche’s proven Motorsport Pyramid via the Porsche Michelin Sprint Challenge Series and Porsche Paynter Dixon Carrera Cup Australia Championship.

Ultimately, the SP Tools Karts to Cars Pathway Program will not only create a defined pathway from Karts to Cars for young drivers, but a platform for these young drivers to potentially reach the highest levels of the sport both locally and internationally.

“Karting Australia’s partnership with SP Tools is one that covers every level in the sport, from the introductory program of Junior Sprockets, through to the elite level of the sport in the Australian Kart Championship.  The ‘SP Tools Karts to Cars ’ pathway program is an exciting new initiative by the team at SP Tools that will assist in building a clear pathway for those who wish to pursue a career from karting into top-level motorsport,” said Karting Australia Chief Executive Officer Kelvin O’Reilly.

“The ‘Karts to Cars’ program is a great extension of the platform that SP Tools provides to the next generation of motorsport talent.  We look forward to the exciting times that it will bring for many of our young drivers.”

Porsche Cars Australia Sales & Motorsport Director, Toni Andreevski believes the program will reinforce the opportunity for the best young talent within Australasia to reach the highest levels of the sport, via the Porsche Motorsport Pyramid.

“It’s fantastic to not only enrich the partnership we have with SP Tools, but provide the framework for all the Junior development initiatives of each our Carrera Cup teams. As the ‘Official Tool Partner’ of both Porsche Paynter Dixon Carrera Cup Australia and Porsche Michelin Sprint Challenge Series, this collaboration between SP Tools, Karting Australia, Patrizicorse and the Earl Bamber Motorsport Team, will only reinforce the opportunity for the best young talent within Australasia to reach the highest levels of the sport, via the Porsche Motorsport Pyramid,” said Andreevski.

For Patrizcorse Managing Director, Michael Patrizi, he shares the thought that the Karts to Cars program is the perfect progression from Kart racing to top-level Car racing.

“SP Tools have been the major supporter of grass level motorsport through the Junior sprockets program and the Australian Kart Championship. It gives me great pride that our racing team, Patrizicorse, will be the official Kart racing team that will assist this program and was selected by SP tools as an important partner to help and assist our future racing stars,” said Patrizi.

“Our team has a great track record of young drivers reaching higher categories quicker than most and that’s because both in and out of the kart, we do a great job of preparing them for that next step. With SP Tools involvement, young drivers have never had a better chance to ascend the Porsche Motorsport Pyramid in Australia in conjunction with our partners Earl Bamber Motorsport. I believe this is the perfect platform for progression from Kart racing to top-level Car racing.”