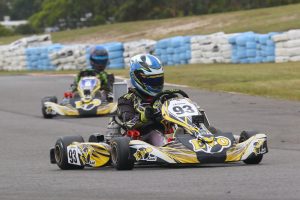 The resumption of the 2020 SP Tools Australian Kart Championship, presented by Castrol EDGE in Newcastle on Saturday have seen a dramatic turn of events for many Championship front-runners, however the elite Junior KA2 category has been about one make – EVO Kart.

Its two spearheads – South Australian Jimmy Pisczyk and Sydney-sider, Adrian Haak have been the class of the field. Pisczyk – who delivered EVO Kart’s first major win in Australia at Newcastle two years ago in Cadet 12 – has two wins to his credit, with the second heat going the way of Haak.

Haak crossed the line in front of Pisczyk in heat one, however had some post race start infringement penalties applied. Although starting fifth for the third heat, Haak scythed through to second, ensuring the Italian brand scored another quinella.

Morning pole-sitter, Jordan Shalala has regularly been among the front runners, as has category debutant, Kmal Mrad – who has recorded some exceptional results, including second in the opening heat and then in a tense heat three was able to hold his nerve to score a third placing.

Championship leader, Hugh Barter (Ricciardo) has had a difficult run, flying straight to Newcastle after quarantining following his recent success in France, which saw him awarded the Richard Mille scholarship to next year’s French Formula 4 Championship. He has been battling regularly among the top five, protecting his position in the Championship with another heat and the Final to go tomorrow.

In KZ2, Australian Champion, Troy Loeskow is well on track to take a second consecutive Title after a flawless performance in his Vortex-powered Ricciardo Kart. He has been the class of the field by some margin throughout qualifying and the three heats, to the point where he cruised to the finish in Saturday afternoon’s final heat.

His Patrizicorse team-mate, Jac Preston took his Blastology-backed Ricciardo to a trio of second places, while Reece Cohen was on track for three third places for the Top Gun Racing CRG team when an incident with a lap and a half to go in the third heat eliminated him and BirelART’s Aron Shields. It was a shame for both competitors as Shields had been impressive and running inside the top five throughout the day.

In his KZ2 debut, Brisbane racer Oscar Targett (Ricciardo) has been showing plenty of grit and determination, rewarded with a third place in heat three after the incident involving Cohen and Shields. South Australian Josh Denton (Kosmic) has dominated KZ2 Trophy and has been regularly challenging for top five positions on track outright.

X30 Championship leader, Jaiden Pope has all but extended his already solid Series lead with two heat race wins for Rush Performance. It wasn’t all plain sailing though with a non-finish in heat one. It has been tensely balanced between Pope and several drivers, in particular Jackson Souslin-Harlow. Souslin-Harlow took out heat one before the pair clashed in heat two – deemed a racing incident. eSports star, JSH fired home for second in the final heat.

Others to impress and in the mix for tomorrow’s finals include ZedCorse Parolin driver Harrison Hoey and Central Queenslander, Jordi Marcon.

In TaG 125, Tyler Greenbury made a welcome return to the track in the SP Tools AKC by setting the pole time in qualifying aboard his Tony Kart. The Queenslander wasn’t able to convert to race wins though, however will be among challengers for the podium on Sunday.

The wins were shared by local racer, Riley Humphrys, Zachary Heard and Cody Brewczynski. Heard is having a breakout weekend with a hard fought second placing in the final race and setting the quickest lap, making a strong claim to be at the pointy end come Sunday’s Final.

Bailey Sweeny is another to be having a breakout weekend in the KA3 Senior class. After taking his first ever Australian Kart Championship heat race win in the first heat this morning, he duly backed it up with another win in heat two! 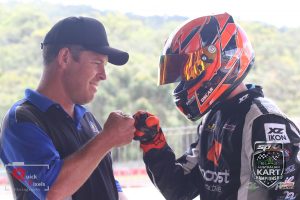 Qualifying pace-setter and Championship leader, Oscar Priest didn’t have much to take to Sweeny in the early heats, however the Boost Mobile driver made the best of the outside front row start in the third heat to edge home narrowly in front of his day-long rival.

Declan and Jace Matthews have both been strong in their performances and look likely to continue their good Newcastle form come finals time.

Regular KA3 front-runner, particularly at Newcastle, Matthew Waters had an up and down day. After not finishing the opening heat, he’s finished the remaining two heats with a third and seventh, meantime Benito Montalbano (second in the Championship coming into the weekend) didn’t set a time in qualifying, but has been on a blitzkrieg passing karts to ensure that he will be a solid contender for a top five in the finals, perhaps even better if things fall his way.

Local driver, Alex Ninovic (PCR) has been the class of the field in KA4 taking all three heats. The category has been roundly dominated by the Scuderia PCR team. Remarkably, the majority of the top positions in the top 10 have been coloured yellow and black with William Newell and Jake Rutkowski being locked in battles for the minors. Holding the flag for other chassis’ is category debutant, Max Walton, who has had his Parolin in the mix throughout the day.

One of the few Victorians entering this weekend has tasted some serious success in Cadet 12. Lewis Francis took out all three heats narrowly. The Parolin brand has been the pack leaders in the sub-Junior category today.

Francis was pushed all the way by the Burns brothers – Jaxson and Jenson – who are also in the Parolin colours. Jenson snared two second places, the other going the way of Jaxson. Jenson Marold has shown flashes of speed, while reigning Cadet 9 Champion, Energy’s Ky Burke got a handle on the track with his Energy in heat three this afternoon.

There’s no better way to make your mark on a Championship than with dominance in your first ever event and that is what Sebastian Eskandari-Marandi has done in Cadet 9 today! The Queenslander has won all three heats throughout the day, while the Championship leaders have struck trouble.

Eskandari-Marandi and Basilio Micale touched in heat one, Micali coming the worse off, however not as bad as Championship leader, William Calleja, who didn’t finish that wild race after an altercation on the final corner of the final lap. Both Micale and Calleja have fought back throughout the remainder of the day and while their overall Championship positions may not be overly harmed at this stage, it is noteworthy that with the abridged Championship, a driver’s best two rounds count.

Proceedings at the Mount Sugarloaf Raceway get back underway from 8am on Sunday morning with another round of heats and then the Finals.

Follow the live timing through the MYLAPS Speedhive App with the results being available at https://speedhive.mylaps.com/Events/1823772