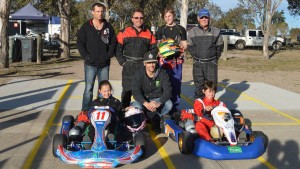 THE Sapphire Coast Kart Club was proud to host a training day with Australia’s number one go-kart racer David Sera on Saturday.

Sera currently holds the top spot on the karting circuit with 15 Australian championship titles and 50 state championship wins to his name.

He also placed second in the world Rotax finals.

Six of the club’s members were lucky enough to take part in the day, getting some quality time on the track and one-on-one training with Sera.

Club secretary Janelle Loftus said the training was exceptional, with each of the members improving their track times by half or even a full second.

“My son Jack who took part in the training got his personal best on the day,” Loftus said.

“David was wonderful, he helped the members set up their karts for the specific track and really taught them how to hold more speed around the course.

“I really couldn’t believe how good he was with everyone.”

She said the club had an application to host the week-long NSW open state go-kart championships next year and was eagerly awaiting a response.

Sera said he was impressed with what the club has accomplished.

“They have a great facility here and the track is magnificent,” Sera said.

“There is an abundance of things to do here on the coast for the entire week so the club should have no dramas hosting an event like that.”

“We were very thankful that David could take some time out of his busy schedule, in November the club will hold its Sapphire Cup and we hope David will return to compete in that.

“If we get to host the state championship it could see 300 drivers come to the area for a whole week.”

The club will also look to host a round of the Southern Star series next year.

Local members are doing well in the competition and are excited by the prospect of a round being hosted at their home club.

“That would bring in another 200 drivers to the track,” Loftus said.

“It would be great for the club and for the coast.”

The Sapphire Coast Kart club’s next track day is this Sunday.