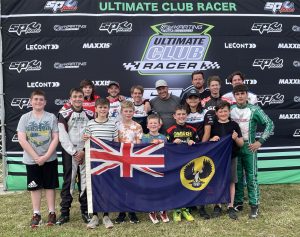 South Australia has taken out the second running of the State of Origin Teams race held in conjunction with the Ultimate Club Racer II in Murray Bridge, South Australia on Saturday afternoon.

The four segment teams race saw drivers each state of Australia in the Cadet, Junior and Senior categories line up against each other for state honours.

First up was the Cadet drivers with Liam Carr taking the chequered flag first, however, a missing transponder handed the segment win to Victorian Sebastian Tander.  New South Wales bounced back with Joseph Belardo being victorious in the Junior segment.

Victoria finished as the runner-up state ahead of New South Wales.

Local driver Joshua Elliston was the pace setter in the KA3 Senior class as has Noah Enright in the KA4 Junior Light dvision.

A total of 18 divisions are being contested at the event across 10 groups with the final round of heats set to begin at 8:30am on Sunday morning ahead of the finals.

Live Timing is available on the Speedhive App.