Russell doubles the stakes, uncertainty reigns in KF2 - From the CIK-FIA 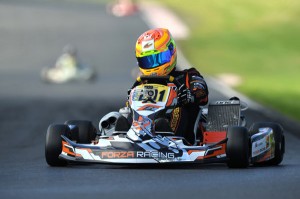 At the PF International Circuit, the European KF3 Championship title was taken by the Briton George Russell, winner of two Races and already title-holder. In KF2, an appeal lodged by Max Verstappen’s Entrant has to be considered by the MSA National Court of Appeal before the 2012 European Champion is finally known.

European KF3 Champion in 2011 on his first attempt at the title, the Briton George Russell (Intrepid-Vortex) has now become the first Driver to win two consecutive European titles in the “Juniors” category (for 13-15 year-olds). George had already confirmed his standing as favourite at the first meeting in Varennes, by winning the first Race before becoming the victim of a rival braking too late at the first bend of the second joust. On his home turf, in Brandon, George did not suffer the slightest mishap. Only 30th after qualifying practice, the title-holder was never put out and gradually climbed through the pack to take 7th place on the grid for the first of the two English Races. From then on, George was scintillating, winning both Races with flying colours to take his personal score to three victories … with only three results being retained to decide the Championship!

“During the first Race, I made a great start and after that I was able to pass my rivals one by one,” he explained. “In the second, Martin Kodric took the lead and each time I overtook him, he attacked again immediately, fearing I might escape. Once I had succeeded hammering the advantage home, it was effectively all over and I took my second win.”

Behind this undisputed leader, the scenario was different each time. First of all it was the Frenchman Dorian Boccolacci (Intrepid-TM) and the Croatian Martin Kodric (FA Kart-Vortex) who stood with him on the podium, as they had done in the first Race in Varennes. Behind the Briton Connor Jupp (Energy-Vortex) and the Italian Luca Corberi (Kosmic-Vortex), 4th and 5th, the Spaniard Alex Palou gained some important Championship points, having arrived at Brandon leading the competition. Also in the Top 10 for this first Race were the Briton Darius Karbaley (FA Kart-Vortex), the Frenchman Gabriel Aubry (Birel-TM), the Finn Joonas Lappalainen (Ninar-Vortex) and the Romanian Petru Gabriel Florescu (Zanardi-Parilla).

During the second Race, Martin Kodric and Dorian Boccolacci were leading the chase behind George Russell when the two Drivers collided, both losing ground as a result of the incident. Luca Corbieri then surged ahead to take second place ahead of Petru Gabriel Florescu, the Romanian also posting fastest lap of the Race. Connor Jupp was alone in 4th place whilst the American Santino Ferrucci (Energy-TM) just got the better of Alex Palou for 5th place. For the Championship, the Spaniard still gained enough points to guarantee the silver medal as Dorian Boccolacci finished his fight-back in 8th place, behind the Finn Aatu Moilanen (Haase-Corsa-Vortex). Martin Kodric and Jonas Lappalainen were once again in the Top 10.

After taking three results into account (out of a maximum of four), the European KF3 Championship podium was occupied by George Russell, Alex Palou and Dorian Boccolacci. Martin Kodric finally finished behind that trio but ahead of Luca Corberi.

KF2: Verstappen must await the decision of the MSA National Court of Appeal
The title of European KF2 Champion was not officially attributed on the evening of this second and last meeting, at the PF International Circuit. Although Max Verstappen (Intrepid-TM) left Great Britain with the greatest number of points, the Dutchman is still not assured the title. To recall, on Saturday Max Verstappen appealed a 10-second penalty imposed on him following a collision with Ben Barnicoat (ART GP-Parilla) during a qualifying heat. As his appeal is suspensive, Max could only start from 9th place on the grid for Race 1, but the results of the two Races scheduled for Sunday now depend on the MSA National Court of Appeal, which has 30 days in which to deal with the case.

As Charles Leclerc (ART GP-Parilla), forced to spend time off-track after contact with an adversary, and Dennis Olsen (Energy-TM), when leading, both saw their hopes fade with dislodged chains, the son of the former Formula 1 driver climbed through the field to take control mid-Race and, subject to the decision of the Court of Appeal, he could grab his second victory of the season. Let down by his engine, the Italian Flavio Camponeschi had already abandoned at the start of the Race, leaving the Britons Sam Snell (Energy-Parilla) and Ben Barnicoat (ART GP-Parilla) to finish as heirs apparent to Verstappen, the latter also posting the fastest lap of the Race. The Top 5 for this first Race was completed by the Italian Felice Tiene (CRG-BMB) and the Finn Niklas Tiihonen (Energy-Parilla), ahead of Nicklas Nielsen (Kosmic-Vortex), the Italians Antonio Fuoco (Tony Kart-Vortex) and Damiano Fioravanti (Tony Kart-Vortex), the Briton Tom Joyner (LH-BMB) and the Italian Paolo Ippolito (Kosmic-Vortex).

The many spectators around the PF International Circuit had there money’s worth in Race 2 for the KF2 category. The battle for victory, with countless overtakes and four different leaders, was a thrill a minute. Three laps from the chequered flag, six Drivers were only a little over a second apart! But a collision forced the Britons Ben Barnicoat and Tom Joyner to abandon. At the same time, Felice Tiene took a decisive advantage over Antonio Fuoco, with the bottom step of the podium being decided in the very last round between Max Verstappen, Nicklas Nielsen and Niklas Tiihonen. The Japanese Nirei Fukuzumi (Kosmic-Vortex) took 6th place ahead of the Italian Damiano Fioravanti (Tony Kart-Vortex) whilst Charles Leclerc ended his climb from the back of the grid in 8th place. The Russian Vasiliy Romanov (Energy-Parilla) and the Italian Paolo Ippolito (Kosmic-Vortex) were also in the Top 10 for this second Race.

Now we have to await the decision of the MSA National Court of Appeal to know whether Max Verstappen or Ben Barnicoat will be heralded European Champion. Charles Leclerc, Felice Tiene and Antonio Fuoco will also be in the final Top 5 of the Championship.