Excitement builds to a climatic season end with three mega Grand Finals set to stage sporting brilliance across the country this weekend.  The Australian Rotax Pro Tour Grand Final in Dubbo will be the first to kick off, with live streaming coverage providing all the action of Saturday’s heat races, followed by the bonus point Pre-Finals and Finals on Sunday which will decide the 2016 Rotax MAX Australian Challenge Champions.

While the drivers are all rivalling to end their season on a high, the New South Wales State Championships are also on the line, with Sunday’s Final winners to earn the coveted blue plate in their respective classes. 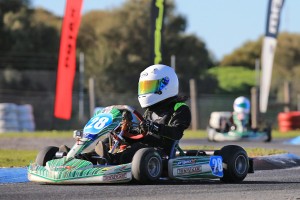 Mini Max
Recently crowned Cadet 12 Australian Champion Kai Allen will be looking to add a second Number 1 plate to his 2016 collection in Dubbo this weekend. The current NSW Mini Max champion is less than 500 points behind series leader and Shamick Racing team mate James Wharton. The pair have traded podium finishes all year, with Hugh Barter joining his fellow Victorian contestants in the Top 3 for a shot at the title.

Junior Max Trophy
JAMROC Racing’s Travis Worton has all but wrapped up his series title in the Junior Max Trophy Class with a commanding points lead over Jaiden Pope in second and Callum Bishop in third. With both Worton and Pope stepping up to the Junior Max class for this weekend, the Grand Final round win is up for grabs. Queensland’s Taylah Agius will be one to watch, having shown great form of late taking on the boys. 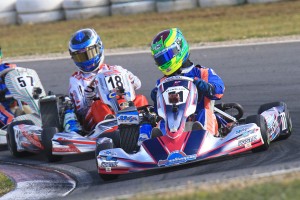 Can the man from Geelong hold off the #18 of Cody Brewczynski in Junior Max. (Pic: Coopers Photography)

Junior Max
In the largest field of the weekend, Geelong’s Dylan Hollis will be focussing his efforts on securing the Junior Max series title. The Kosmic driver holds a minor lead over the TF Engines Redspeed driver of Cody Brewczynski. While the pair will be teaming up later next month in Italy, the Rotax MAX Australian Challenge Champion is still to be decided, and both drivers will be putting it all on the line to have that Number 1 plate in their possession.

Rotax 125 Light
With only 100 points separating Team Australia drivers Cody Gillis and Joshua Fife, the TWM Kosmic duo will no doubt be the red hot favourites in the Rotax 125 Light class this weekend. A recent work injury sees FA Kart’s Brad Jenner out of the hunt this weekend, giving JR Memorial Award winner Paul Rodgers an opportunity to earn his way into the series Top 3. Cameron Longmore will be looking to impress on his senior debut, while Pacific Kartsport’s Troy Morrissey will also be striving for a strong result to cap off a solid year for the Queensland Arrow driver.

Rotax 125 Heavy
The closest point margin of any class is that of the 51 point difference between Shay Mayes and Clem O’Mara in the Rotax 125 Heavy class. Both drivers fought hard at Puckapunyal for the Rotax US Open ticket, but it was Redspeed’s Shay Mayes who held on to win the prize. In a true Grand Final showdown, Clem O’Mara will be looking to turn the tables in a last chance effort to add his name to the history of drivers with the Number 1 next to their name in the Rotax Heavy class. Ben Ritchie will also be one to watch this weekend. The Sydneysider has the opportunity to drive his way into the final Top 3. 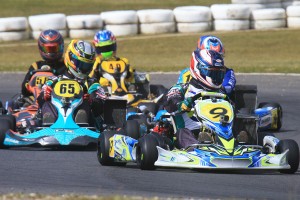 DD2
This season’s DD2 racing has produced some of the closest and most hard fought battles at the front of the field, which has set up a fantastic challenge for the Top 5 drivers leading into the Final round of the series. Formula K’s Adam Lindstrom holds a comfortable lead, with Troy Woolston, Nathan Tigani, Joshua Car and Lee Mitchener all within striking range of the series runner up position. Queensland’s Ryan Kennedy will also add spice to the mix, with a handful of drivers being real potentials for a win on Sunday.

DD2 Masters
The competitiveness of the DD2 Masters class has also been a highlight of the 2016 Rotax Pro Tour, with Formula K’s Lee Mitchener developing a handy points lead over regular rivals Scott Howard, Kris Walton, Troy Bretherton and Mark Flood. We can also expect a hard charging effort by Full Tilt’s Danny Wright after a strong showing at Puckapunyal in his return to the 2016 Rotax Pro Tour. With bonus points on offer for the Grand Final round, a few surprise results could have a season changing effect on the overall series standings.

Manufacturer’s Cup
Not only are the drivers racing for pride and glory, but the chassis manufacturers will also be hoping for a string of solid results to win this year’s Manufacturer’s Cup. Points are awarded to the Top 3 placings of the Final in each class. Currently Kosmic holds a 30 point lead over Tony Kart, with CRG, CompKart and Formula K rounding out the Top 5 with only the Grand Final round to go.

The Rotax Pro Tour Grand Final takes place at the Lincoln County Raceway in Dubbo, New South Wales from 30 September – 2 October 2016. To follow the event throughout the weekend, tune in to the Live Stream coverage from Saturday onwards, with all heat races, Pre-Finals and Finals to be broadcasted at www.rotax.com.au/streaming.html. Follow up-to-date results via the Rotax Pro Tour Facebook and Twitter pages, and Live Timing via the Race-Monitor app.