The Ricciardo Kart Junior Team are fired up and prepped to tackle the penultimate round of the Australian Kart Championship at Newcastle’s Kart Racing Club circuit this weekend. 187 entries have been received for the event across seven classes with the Ricciardo Kart Junior Team representing in four of the seven categories. Looking to continue their recent show of form Brock Plumb and Troy Loeskow will be flying the flag high for the team in the KZ2 class. After powering his way to the team’s first Pole position of the AKC season at the previous round in Ipswich, Plumb will be looking to go one better and secure the maiden win in Newcastle.

The KF3 class will see three Ricciardo Kart Junior Team drivers take to the grid against Australia’s best. Harrison Hoey (KF3 and KAJunior), Taine Venables and Lochie Hughes will all suit up for the team’s penultimate round clash in the national championship. Hughes is lucky to be heading to the track this weekend after walking away from a huge crash, when he flipped his Ricciardo Kart at the Rotax Pro Tour event at Puckapunyal no more than two weeks ago. Fortunately the young Ricciardo Kart Junior Team driver walked away fairly unscathed and a speedy recovery will see him take to the Newcastle circuit this weekend. In the KA12 class Jackson Walls will race against the country’s best behind the wheel of the Ricciardo Kart chassis.

“We have come off a very good race meeting at the last round held in Ipswich where we had the potential to score some fantastic results but things in the final just didn’t fall our way,” said Team Principal Michael Patrizi. “Our drivers have worked hard since the last round and we are looking forward to our race meeting at arguably the most challenging circuit in Australia.The Newcastle track is very challenging for the drivers and their mechanics as the track is extremely physical for the driver and very challenging for the mechanic to have the set-up spot on.”

Practice for Round 4 of the AKC will be held on Friday September 4 followed by practice, qualifying and heat race competition on Saturday. Sunday afternoon will see the round winners, and New South Wales Champions crowned following the finals. Karting Australia has once again teamed with My Sport Live to stream Sunday’s race program live across the Internet. The vision will be available through Karting Australia (karting.net.au) 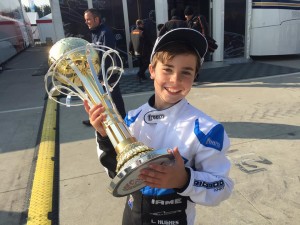 1. Lochie, you’ve bounced back from a massive accident at Puckapunyal to race here this weekend. Tell us what happened and how has the recovery been going to get you back in the Ricciardo Kart for Round 4 of the AKC at Cameron Park Raceway?
What happened was I was going around the first corner and there was a little crash from second to fifth, causing the kart in front of me to be shunted sideways.  Whilst trying to get passed him, his kart bounced sideways into my front right tyre, causing my kart to flip end over end. Was a scary ride.  I was very lucky that the large field of J Max drivers behind managed to avoid hitting me underneath my kart. I have been resting a lot and taking it easy to get me ready for Round 4 of the AKC at Cameron Park Raceway.

2. As one of the first drivers in the world to form part of a Ricciardo Kart Junior Team it must feel pretty special being associated with Australia’s current best F1 driver and his product?
Yes it feels really great to be associated with Daniel Ricciardo. To achieve what Daniel has done, coming from Australia, is a real inspiration. It makes you feel proud to be in his product and part of his team.

3. Describe the Ricciardo Kart and how have you adapted to the chassis?
I would have to say that the Ricciardo Kart is the very best chassis I’ve ever driven. Because of my small size, we have had to make adjustments for me just to fit in the Junior kart chassis. However it has not affected the performance of the kart. It has a very big sweet spot to get the set up right.

4. How much does it help your development as a driver being part of the Ricciardo Kart Junior Team and having people like Michael and the other drivers around you, to learn from?
Driving with the Ricciardo Kart factory team in Europe has helped my development as a driver a great deal. They have some of the best KF Junior drivers in Europe. Being part of the Ricciardo Kart/ Birel ART Factory team, exposes you to highly professional mechanics and the best Data engineers to help you find those tenths you wouldn’t think you had. Michael Patrizi has been the glue who holds it all together. He has been a massive part of it. Helping me everywhere around the world and especially in Italy.

5. What is your goal this season?
My goal this season (because its my first year in KFJ and JMAX) has been to get comfortable driving the bigger kart. Ultimately my goal is to try and get on the podium. However as long as I am improving, it is great preparation for racing in Europe next year.

6. What is your favourite track and why?
I have raced all over the world and my favourite track would be the track at Las Vegas. It’s a temporary track, so no one can get to practice on it, which makes it a more level playing field. The drivers who can adapt quickly have the best chance of ending up on top. There is no room for error, due to the barriers. You could compare it to racing at Monaco. This year will be my 4th time to compete at Vegas.

7. What do you do in between rounds to keep yourself sharp and ready for racing?
In between racing I try to keep myself fit by boxing, going out for runs and riding my bike. And if I’m not doing that I’m busy at school with study and homework.