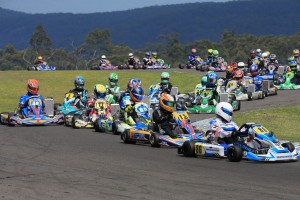 The Ricciardo Kart Team has started proceedings at the Australian Kart Championship in superb fashion at Newcastle Kart Raceway on Saturday.

The predicted heatwave hit the facility with a vengeance, forcing the abandonment of this afternoon’s final four heat races.

Tulloch swept to pole position aboard his Ricciardo Kart in qualifying, then from there has kept the field at bay. The challenges throughout the top 10, including the legends of the sport, is setting up for a huge crescendo in Sunday afternoon’s final.

Jace Matthews has made his senior debut in the KA1 category in perfect fashion, the Queenslander taking his Ricciardo Kart to pole position this morning and then two convincing heat race wins.

Backing him up with great style has been Thomas Steele, who finished his two KA1 races with third and second placed finishes.

The Gold Coast’s Lachlan Hughes – who returns to the blue and white of the Australian Formula 1 star’s team this season – has been at the fore of KA2 Junior, ending his run today with a second heat race win.

The elite Junior category got underway with debutant Reece Cohen taking the pole position and the opening heat race win. 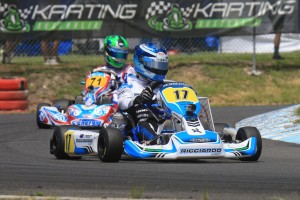 TaG 125 is delicately poised with three different race winners from the heat races. After Josh Davey set the fastest time in qualifying, defending Champion, Brendan Nelson won the first heat from the outside front row. In the second heat, Newcastle driver Zac van Leeuwestyn charged through to win the heat, whilst in the third heat, Davey staved off a challenge from Nelson to win the race.

The KA3 Senior category has been dominated by New South Wales pilot, Kody Garland. Garland stunned the near-capacity field with pole position and then backed that up with three heat race wins.

In KA4 Junior – the full field is producing brilliant entertainment. After new JC Kart recruit Zac Crichton qualified on pole, it has been regular rivals over the last two seasons – Jay Hanson and defending Champion, Cooper Webster who have emerged victorious in the two heats completed.

The Cadet 12 class saw pole position fall the way of Victorian FA Kart driver, Tex Starr-McKoy and led all but the last two corners of the opening heat before being closed down by James Wharton – the Shamick Racing driver passing Starr-McKoy in sight of the chequered flag.

Tomorrow, racing will resume at 8am with the continuation of the heats not completed this afternoon, before the fourth round of heats and the finals take place after that.

Live streaming of the Sunday’s proceedings will be on www.karting.net.au.