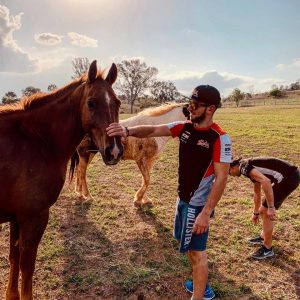 The Frenchman, who made his Australian debut at the corresponding event last year, arrived in Brisbane earlier this week before spending the past couple of days with Sodi Kart Australia Team Principal John Grother at his Gladstone base.

Grother took the opportunity to provide Abbasse with a true Australian experience on a cattle property at Mt Larcom.

Maintaining his hands-on approach to his racing, the 12-time French Champion will be assisting to prepare the ten Sodi Karts that will be in action at the Xtreme Karting Facility next week.

“It’s great to be back in Australia for the second year in a row. Last year I saw a little bit of the Gold Coast, which was really cool but to see another part of the country is also amazing,” said Abbasse.

“Seeing how a cattle farm works and checking out the machinery was very interesting, now it’s time to spend a few days preparing the karts for next weekend.”

“Winning last year was a real highlight of the year for me. To take the winner’s surfboard home to France was something really special,” said Abbasse.

“Everyone was so welcoming to me and I thoroughly enjoyed my time here. I can’t wait to get on track next Thursday.”

Featuring more than 220 drivers from all parts of Australia along with international visitors from Canada, France, Italy, New Zealand and Singapore across eight classes, the event will see drivers reach speeds in excess of 160 km/h in the elite KZ2 class.

In addition to the racing, the Race of Stars will also incorporate a ‘Food Truck Fest’ with numerous local Food Trucks set to be in attendance as it launches the Gold Coast into a ten-day celebration of motorsports. The celebrations will culminate with the Vodafone Gold Coast 600 Supercars event being contested on the Surfers Paradise Street Circuit the following weekend.