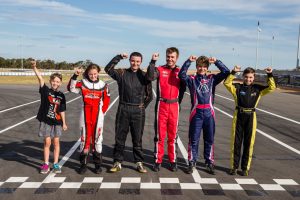 The winning contingent of Queensland drivers in the State of Origin teams race (Pic: Pace Images)

Queensland has become the victorious state in karting’s first official State of Origin battle held at The Bend Motorsport Park on Saturday afternoon as part of the inaugural Ultimate Club Racer event.

The fight for state supremacy was tense throughout the four categories with Western Australia, the Northern Territory and New South Wales all holding the top spot until it came down to the race four, 10 lap decider.

After Cadet 9, Cadet 12 and an incredible KA4 heat race, the pressure was on New South Wales’ Bathurst 12 Hour and Porsche racer Aaron Zerefos has he was the pole-sitter for the 4SS category finale.

He was turned around early in the affair which opened the lead up to Queenslander, Brynn Stewart. While Stewart led, the second Queensland representative, Scott Pearce was picking his way through the field.

Western Australia spearheaded by Brooke Miller were staging a late fight, however the Queensland quinella meant that the points gap was too much for the WA team to take the win with home state South Australia claiming third on points.

Miller has been the best of an impressive fight in the 4SS Ladies category today. She has taken three heat race victories, while plenty has been going on among the all-girl race. Alice Litzow and Billie Humphrey have been locked together in battle throughout all heat races with Caprice Hall also getting involved.

Kirsty Mullen has been impressive in two four-stroke 4SS categories – starting tomorrow’s heat four from second in the Ladies and then third in Light.

4SS Light has been dominated by young Jack Munro, who is in his first race as a senior this weekend and has won from all three starts over Queensland Ricciardo Kart pilot, Scott Pearce.

Ethan Flynn is the best of the 4SS Juniors, while Luke Lane has been locked in a battle with Pearce in 4SS Medium.

Marcus Pisani and Jordan Shalala have been battling it out in KA4 Junior sharing wins, Josh Healy has taken two heats in TaG Restricted Light and Cody Leunan has dominated TaG Light winning all three races.

South Aussie Dominic Mercuri has been the force to be reckoned with in Cadet 9 winning two heats and Miley Miller is another female racer doing strongly in Cadet 12 – winning two heat races in one of the hottest contested categories.

Tomorrow’s action kicks off at 8:30am with the final round of heats before the finals beginning at 11am.

The Bend Motorsport Park Karting Stadium is located within the multi-million dollar The Bend just a few kilometres east of the town of Tailem Bend and about 15 minutes from Murray Bridge. Entry to the event is free.

For the Full Results from today’s action please click here.