Livestream from Sunday’s action can be found here www.watchmysportlive.tv 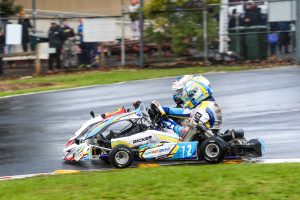 The record number of SP Tools Australian Kart Championship entrants were greeted with an icy welcome at a freezing Eastern Lions Kart Club on Saturday with mixed conditions producing some interesting results in the third round presented by Castrol EDGE.

West Aussie Sam Dicker took little time to get up to speed, setting the pole position and then dominating the first two races. He looked on target to make it three on the trot, that was until James Golding arrived on the scene.

The Supercars regular stormed from 26th on the grid to mow down the field and getting through for a last corner win. He was the beneficiary of a tyre advantage, after failing to finish the opening heat meaning he had better wets for heat three than his competition.

In TaG 125, it was as though you were transported yourself to an early 2000’s Australian Championship with the masters of the category showing experience matters in difficult conditions.

Resuming their battle from the previous round, Brendan Nelson and Leigh Nicolaou were trading blows throughout the day – with Nelson getting two rounds up over the Victorian – but it was the supporting class that rose up in the damp running – Victorian veterans Daniel Rochford, Jake Spencer and Matt Wall all nipping at their heels at various stages throughout the three heats held today.

The elite junior category, KA2 is poised nicely with Costa Toparis provisionally ending the day as Championship leader. He came into the round one point behind Lewis Francis, however the two wins he took will edge him past the Victorian based on Francis’ results. 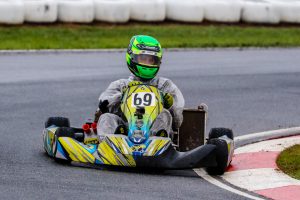 Jake Rutkowski was victorious during the day in KA2 (Pic: Pace Images)

Jake Rutkowski put in a stunning performance to take a late race win and Max Walton withstood pressure to take his heat race.

Being an oversubscribed class, a full picture of how the weekend has played out won’t be established until the Final grid is generated.

Benjamin Munro has been on fire in KA4 Junior taking the first two heats in commanding fashion and put in a mature drive in the third heat.

Thirty seconds before drivers were due to hit the track, a torrential shower of rain struck the circuit – turning from being a track where dry weather tyres would have excelled to the complete opposite – sadly for the competitors there was no time to change.

James Anagnostiadis came through and held on for the win after a spirited fight with last round winner, Sam March (who is proving to be an expert in these conditions – as it was a carbon copy of Bolivar’s KA4 final!), but March dropped a couple of places late in the race and Munro was able to cross the line second.

KA3 Senior was another category oversubscribed. From the four races held today, Kurtis Tenant nailed two wins and a second from the heats he was entered in – which is probably one of his best AKC senior performances.

Jace Matthews and James Sera shared the other wins – those two involved in some strong battles – Sera fighting back after being shuffled to fourth in one of those skirmishes.

Tommy Harradine, making his return to AKC competition has been impressive and will be a factor come the final, another to impress is Dunlop Super2 Supercars Series racer and former Champion, Matthew McLean, who’s wasted little time to get back up to speed.

Runaway Championship leader, Alex Ninovich has had a rare off day, barely featuring in the results. Depending on how finals day plays out, it could lead to an interesting penultimate round. 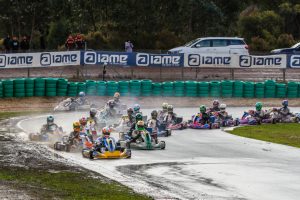 X30 has been the Brad Jenner show, the MKC EOS driver putting in three fine performances to dominate each race today. Those looking to challenge him have been in solid fights all day with Jace Matthews, Beau Pronesti, Jack Bell and Jackson Souslin-Harlow appearing the men most likely.

Cadet 12 is poised in an interesting place. Riley Harrison arrived at Puckapunyal a man on a mission taking two dominant wins in the oversubscribed classes and second in another of his performances.

Basilio Micale took another of the wins, however the big story has been Championship leader, Sebastian Eskandari-Marandi. Although taking pole position and the third heat, the runaway leader was uncharacteristically off the pace early in the day. This won’t phase the current Cadet 9 Champion in any way, in fact probably the opposite!

A big surprise on debut was New Zealander, Marco Manson. Making his AKC debut, he has been right among the front runners throughout the day, including a second placed finish.

A different chassis is making no difference to the result in Cadet 9. Cruz Kelly is on his third chassis in three rounds and has not missed pole or a race win since Bolivar! He set the pole position and was dominant.

Archie Bristow on his Championship debut has been impressive since heat number one and could spring a surprise so too Carter Lamperd and Jensen Damaschino who are all in the mix.

Tomorrow, the action starts at 8am at the Hume International Karting Complex, Seymour-Tooborac Rd, Hilldene VIC 3660 and entry is free.

The event will be livestreamed in its entirety through MySportLive.TV with the link to the login at www.watchmysportlive.tv

While the weather may be cold, the action on the track promises to be red hot!

The Australian Kart Championship is presented by SP Tools and Castrol EDGE.

For the full results https://speedhive.mylaps.com/Events/1991364