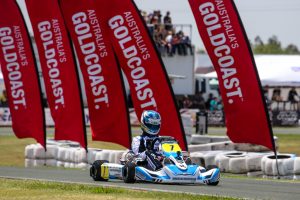 Matthew Payne at full speed at the Race of Stars (Pic: Pace Images)

Emerging New Zealand karting star, Matthew Payne has upstaged some of the world’s finest exponents of kart racing on the opening days of the 2019 Gold Coast 600 Race of Stars on Queensland’s Gold Coast – the first official off track event of the Vodafone Gold Coast 600 Supercars event next weekend.

The recently turned 17-year-old Aucklander driving a Ricciardo Kart for Patrizicorse backed up yesterday’s practice pace by setting the quickest lap in qualifying this morning. He then went on to take the first heat after a spirited fight with last year’s winner and twice runner up in the World Championships, SodiKart’s Anthony Abbasse.

It was in the second heat though where Payne showed his mettle. Dropping down the order on the first lap, he fought his way from seventh position as the fastest kart on track pulling a number of daring passes entering turn one at 160 kilometres per hour.

The most daring of which came late in the race against five time World Champion, Davide Fore, who this weekend has joined forces with old team-mate from Europe – Walkinshaw Andretti United Supercars pilot, James Courtney in one of his JC Karts. Fore had no answer for Payne (almost 30 years his junior!) as he swept underneath.

Payne ran out of laps however to get on racing terms with Abbasse, however it has set up a thrilling fight for tomorrow.

Abbasse’s SodiKart team-mate Mathew Kinsman has ensured the international domination has continued, the Kiwi annexing the top four on both occasions today.

The fight to be top Australian and the winner of the Jim Morton Perpetual Trophy is a spirited one and any number of drivers are in with a shot at that in tomorrow’s final. A real surprise packet has been Kye Cavedon and also up there have been last year’s Australian KZ2 Champion and current TCR Australia pilot, Aaron Cameron, inaugural Race of Stars winner, Chris Hays and Jay Coul.

In the elite Junior category – KA2 – Adrian Haak is showing great form in his EVO Kart. After setting the pole time in qualifying this morning, he went on to take two solid heat race victories and is well placed heading into tomorrow’s big races.

He has been kept honest however with a group of racers all fighting out for the win and podiums including New Zealander, Liam Sceats (SodiKart) having his best run in the category, along with Oscar Targett (JC Kart), along with Ethan Feather (Parolin) and Tristan Griffin. 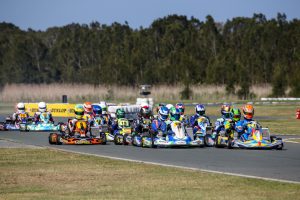 It has been a hard fought battle in the TaG 125 class (Pic: Pace Images)

The TaG 125 category is heading towards an outstanding final. With more entry numbers than track limits, the field has been split in four groups to race each other and produced four different winners in Brendan Nelson, Marc Tulloch, Angus Wallace and Cody Brewczynski. Young Sydney-sider Wallace has shown no fear in a fight against four time Australian Champion Nelson, finishing narrowly behind him in the first round of heats and then defeating him in heat two.

Tulloch has been among the top two in both his heats, while Thomas Cooper and Tyler Howard too have been impressive.

French-Canadian visitor, Thomas Nepveu from Quebec, hasn’t had the welcome mat rolled out for him by the Australians, taking his Ricciardo Kart to some hard fought fourth positions.

KA3 Senior has turned into an interesting family feud between Jace and Declan Matthews. The latter has just moved up to senior racing and has instantly stated his intentions to take the fight to big brother. The duo were involved in an awesome race in the second heat that went to the wire – ultimately decided in favour of Declan just in front of his brother.

Earlier in the day, Jace took the opening heat, while Declan was down the order after an early race skirmish.

Bailey Sweeny has shown some great form, so too Jai Brown and Blake Motbey, while James Sera – who has come out of retirement for the event – is showing no lack of skills, nudging the top five in both of today’s heats. 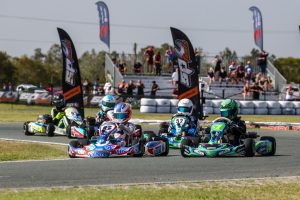 Kobi Williams (#1) is the driver to beat in KA4 Junior (Pic: Pace Images)

Australian Champion, Kobi Williams has dominated KA4 Junior, setting a commanding pole position and then winning the two heat races today. He has been pushed by a number of competitors, none more so than Victorian Jesse Lacey who scored a pair of seconds. Kurtis Tennant, Marcus Pisani and Joe Fawcett among others are right in the mix heading into tomorrow.

Tennant has been at the top of the over-subscribed KA3 Junior category today also, scoring a pair of wins. He was joined by Hugo Simpson and Ethan Feather in that club come the close of today’s racing. Nicholas Sacco has been impressive too as has William Seal and Ty Spencer. Meantime, Zane Rinaldi had an interesting day finishing second in his first heat before a small mistake in his second sent him deep in the field and spurred a charge back well inside the top 10.

Cadet 12 is poised as a fight between a number of competitors. Ryan Macmillan scored two heat race victories today, while Aussie Champion, Harry Arnett went perilously close to achieving the same. After a heat one win, Arnett was second in the closest race finish of the day – pipped on the line by Lincoln Taylor by just 0.03 of a second – akin to the width of the sticker on his nosecone!

Action will start again tomorrow at 8:30am Queensland time (9:30am AEDT) at the XTreme Karting Complex – Pimpama Jacobs Well Road, Pimpama. Entry to the public is free and a gathering of local food vans provides a variety of food options.

The day’s events will be live-streamed via the Karting Australia website at www.karting.net.au or via the Race of Stars Facebook page – www.facebook.com/raceofstars.