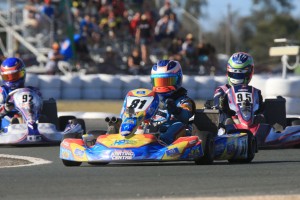 Oscar Piastri will be based in Europe full-time in 2016 (Pic: Coopers Photography)

After sharing his driving commitments between Australia and Europe this year, the 14 year old Victorian has committed to the full 2016 European calendar and will relocate to Europe to drive the FA Kart for the highly regarded British team.

Piastri has chalked up some great success in the junior ranks this year, his first full year in the highly competitive KF-Junior class. A top ten finish at the European Championship race in Portugal, a stunning victory in the opening round of the Australian Championships, the Victorian State Championship, back-to-back victories at the City of Melbourne titles, first place at the Gold Coast Race of Stars, winner of Junior Top Guns, Top Qualifier and overall third in the Australian Championships all results of his skills and determination. He also attended the CAMS Junior Academy Development Camp and represented Karting Australia on the grid of the Melbourne Formula 1 race with other young karters earlier in the year.

Ricky Flynn Motorsport is also no stranger to success, with back-to-back KF Junior World Championships, KF World Championship and a European Championship over the last two years they are a prime contender for further success in 2016. Running the FA Kart and Vortex prepared by ONE Engines, RFM is a truly professional team that leaves nothing to chance, highly respected in the paddock and always seen fighting for victory at international karting events.

Team owner Ricky Flynn had this to say, “RFM welcomes its latest driver Oscar Piastri for OKJ in 2016. We are all very excited and very much looking forward to working with Oscar next season. We have watched Oscar closely in 2015 on the European Karting circuits and have seen him achieve some very impressive results. RFM is always looking for the next up and coming F1 drivers and it is with this in mind RFM has chosen to take Oscar on for 2016. We see him as a star of the future. In 2016 RFM is going for its third consecutive CIK Junior World Championship and we believe that Oscar can help bring home this title.”

“This is a fantastic opportunity for me to take my driving to the next level. Ricky Flynn Motorsport is one of those teams that you see in the European paddock and you just know they mean business and then you race alongside their drivers on the track and you see the results. It will be amazing to actually be one of their drivers next year. I’m also really happy to be driving the FA Kart chassis, the kart I’ve had so much success in Australia with my mentor James Sera and the JSKC team”, said Oscar.

“It’s going to be a very busy year, 15 international races and a big testing schedule means I need to move to Europe. It’s exciting but also a huge commitment for my family and school and I cannot thank them enough for their support. Finally, my major sponsor HP Tuners has been with me since I started karting and without their support and the support of my other sponsors Race Render and VCM Performance this wouldn’t be possible so make sure you check out the tv show Driven Not Hidden on One HD on Sunday afternoons! I also hope to announce some more sponsors before the end of the year.”

James Sera, Multiple Australian Champion and FA Kart Dealer said, “I’m really happy to see Oscar taking another big step in his career. Although of course I would like him to be driving for my team in Australia next year, I’m very proud to have helped him over the last four years in Australia and played my part in his long list of achievements. When I first saw him drive as a tiny little kid I knew he had something special and I’m happy he will drive the FA Kart for the team I consider one of the best in the sport.”

Keith Prociuk, HP Tuners CEO and American Trans Am series racer said, “Oscar’s results in 2015 were outstanding and we look forward to this exciting step in his career. As a provider of automotive software products it’s fantastic that we can support a young driver of his calibre as he climbs through the ranks of international motorsport.”