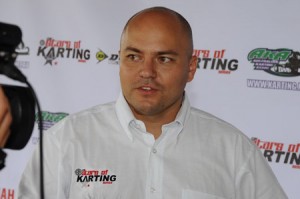 The Australian Karting Association (AKA) will move into a new era in terms of the media and marketing of the sport next month.

After seven years with one of Australia’s leading media, marketing, events and public relations companies, BAM Media, Lee Hanatschek will join the Association on a full-time basis as Media and Marketing Manager from February 11.

The move is cordial and has been jointly announced today by AKA National President, Simon Whiting and Brett Murray, CEO of the BAM Group of companies.

“For several years Brett Murray, Lee and the team at BAM Media have been influential in building the profile of karting in the media, which has in turn led to a significant amount of interest in our sport,” said Whiting.

“As an Association we are very much in a revolutionary stage where it has come time to really look at the sport as a whole and where we are heading.

“Last November the National Karting Council reviewed where we want the sport to head in the next few years and a lot of these things will need someone on a full-time basis to assist with implementing them.

“Lee is very passionate about the sport but he also has the great ability to be able to take his ‘karting’ hat off and look at the sport from the point of view from the outside – which is just what we need at this point in time.”

Murray has mixed emotions about the announcement after a long association with both Hanatschek and the AKA.

“I am proud that the BAM Group has been able to provide the tools and environment for Lee to develop into one of the most respected young operators in the business. He has played his part with a work ethic and passion that a business can only dream of from all its employees,” said Murray.

“The BAM Group has enjoyed its long association with the AKA and I believe has been influential in its growing position in the market place and its increased competitor numbers – Lee is the person who can take the majority of the credit for that. His creditability within the karting industry and the media is evident with the new position that has been created for him.

“Lee will always be a part of the BAM family and has played a major role in the development of our group of businesses. While we are delighted that he is following his passion of karting, I am personally disappointed that he will not be around to share in the next phase of our group’s growth.

“We wish Lee and the AKA nothing but the best for the future and look forward to doing some business with them both somewhere down the line.”

Hanatschek is excited about the potential of his new role working under the AKA banner.

“I’ve been involved in the sport of karting for almost 20 years now in varying roles. I’ve seen the ups and downs of the sport and believe that it has enormous potential if it is marketed correctly,” said Hanatschek.

“I’ve thoroughly enjoyed working at BAM and am very proud of what has been developed over my time with the company, not just with the AKA but with all of the other great people and clients that are a part of the BAM family.

“By joining the AKA full-time it will allow me to become more involved with the marketing of the sport from a variety of angles by using my motorsport and professional experiences to assist in further growing the sport and spreading the word about karting.”