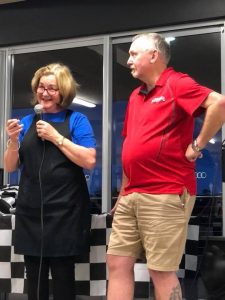 Today we celebrate not one, but two hard working volunteers Julie and Michael O’Brien who have been volunteering in Victoria for 16 years now.

Calling the Eastern Lions Kart Club home, both Julie and Michael were introduced to the sport by their son’s friend before the bug hit and everybody was hooked.

When asked What has been the most memorable event that you’ve been a part of and why? The O’Brien’s responded “There are probably too many to mention. We love club days and even open meetings where everyone gets together. We think the Junior events are always exciting because the kids get so much out of the events. To see their faces and hear about their racing experience when they come into the canteen after their race.

But really the most memorable event was when we watched our son run his first race and when he won for the first time. We were extremely proud of his efforts and hard work.”

Both Julie and Michael are integral members of the Eastern Lions Kart Club and are heavily involved with the running of the canteen with the wonderful group of people that volunteer their time and effort to make it successful whilst Michael also is involved in operating the track lights during a meeting.

When asked about Julie and Michael O’Brien, Eastern Lions Kart Club President Steve Pegg added they epitomise what volunteering is all about working tirelessly in the background never looking for any recognition. We are extremely lucky to have them at our club.

Across the rest of the week, Karting Australia will shine some light on more of the backbones of our sport, from the Canteen, to technical, Officials and grounds keepers to show we thank them, and everything they do!