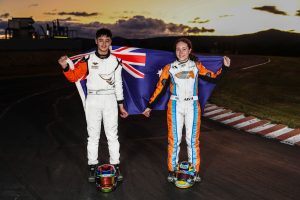 Peter Bouzinelos and Aiva Anagnostiadis will represented Australia in the karting disciplines at the 2022 Motorsport Games (Pic: Pace Images)

Karting Australia, in conjunction with Motorsport Australia, is proud to announce Australia’s representatives in the Karting disciplines at the 2022 FIA Motorsport Games to be held in France on October 26-30.

With the karting disciplines being split into a Senior (15 to 18 years old) and Junior (12 to 14 years old), 2021 Ladies Trophy Winner Aiva Anagnostiadis and 2022 Australian Kart Championship Round Winner Peter Bouzinelos will fly the Australian flag at the event.

It is the first time that the kart racing disciplines have been contested as a part of the Motorsport Games.  Anagnostiadis is delighted to be chosen as Australia’s Senior karting representative at the games.

“It is an absolute honour to be Australia’s representative at the event.  It is certainly the highlight of my racing so far, there’s no higher honour than being chosen to represent your country on the world stage,” said Anagnositadis.

“To represent Australia is a dream come true.  I’ve worked very hard this year and this really tops it off.  I’d like to thank Karting Australia and Motorsport Australia for the selection and look forward to doing my country proud next month,” said Bouzinelos.

“The inclusion of karting in the Motorsport Games is a significant boost for the sport in recognition alongside other forms of motorsport and we’re excited to have two representatives for Australia at the event,” said O’Reilly.

“Aiva and Peter are both fantastic racers and we look forward to them doing the country proud in France.”

“I am confident both Aiva and Peter will do a great job in flying the Australian flag against some of the best karters in the world.

“The FIA Motorsport Games will be a fantastic opportunity for each driver to showcase their skills on the world stage – just getting selected to attend is something they should be very proud of.

“On behalf of Motorsport Australia, I wish Aiva and Peter the best of luck in their Karting endeavours and we hope they can return home with a Gold Medal.”

As announced previously, Stephen Grove will be the Australian Team Captain.  Grove, along with his son Brenton will represent their country in the GT discipline.  2018 Australian Kart Champion Aaron Cameron will be Australia’s representative in the Touring Car discipline.

Further information on the FIA Motorsport Games can be found at https://www.fiamotorsportgames.com/