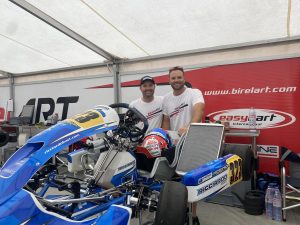 Michael Patrizi and his mechanic Hayden Patrizi in France.

He then progressed to Formula Ford in 2004 before moving into the Formula BMW Asia series in 2005 and the UK the following season.

During his time behind the wheel, Patrizi competed in the Formula 3 Euroseries for the Prema Powerteam before returning to Australia where he raced a host of machinery including Supercars and Porsche Carrera Cup.

Patrizi will be one of 69 drivers lining up in the KZ2 Masters this weekend.  Also included in the entry list is multiple-time World Champion Davide Forè and former European Champion Nick De Bruijn.

The headline for the event is the Mondokart.com FIA Karting World Championship – KZ where Patrizi’s protégé Marijn Kremers will be aiming to secure his second World Championship.  Swedish driver Noah Milell is the reigning Champion and there are also a host of former World Champions on the entry list.

Victorian Henry Johnstone is one of 126 drivers from 26 countries in the FIA Karting KZ2 World Cup – as is Oscar Targett and Australian Kart Championship regular Nathan Crang.

Official Practice begins on Friday morning ahead of qualifying and the heat races.  The racing will continue across the weekend with the finals to be contested on Sunday afternoon.

Results, Live Timing, Live Streaming and other information on the event can be found here https://www.fiakarting.com/event/2022-le-mans/guide