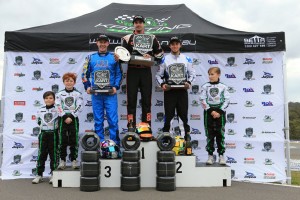 The Ricciardo Kart Junior Team has secured its first ever podium in the Australian Kart Championship with Troy Loeskow flying home to finish second in the highly competitive KZ2 class. Starting from the front row of the grid Loeskow powered his way through the field in what is a fantastic achievement for the team in its debut year in the AKC. Despite a third and sixth place result in the heat races Brock Plumb was unable to capatalise on his strong Saturday form and unfortunately retired from the KZ2 final after being taken out by another competitor.

“This is a massive achievement for the Ricciardo Kart Junior Team to score our first podium in our first season of the Australian Karting Championship!” Team Principal Michael Patrizi said. “Troy has shown huge improvements this year and deserves a big congratulations on his first AKC podium with the Ricciardo Kart Junior Team in the highly competitive KZ2 class. The only damping on the successful weekend was the fact we had two karts with the speed to win the KZ2 final. However with Brock taken out early in the race and Troy bumped on the final lap, racing for the lead, the victory cruelly slipped through our fingers. Now we have the speed dialled-in there is plenty of excitement throughout the Ricciardo Kart Junior Team camp as we head to the final round in Victoria full of confidence.” 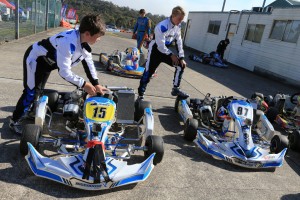 In the KF3 class Harrison Hoey showed his maturity as a Ricciardo Kart driver to finish 11th in the final despite starting from 21st on the grid. After showing promising speed in the heat races, KF3 teammates Lauchy Hughes and Taine Venables were not so fortunate, succumbing to engine issues in the final.

The weekend also saw two competitors behind the wheel of the Ricciardo Kart DR-AR28 chassis in the strong, 30+ KA junior field. The chassis managed to grab Pole position with young Jace Matthews driving for Project X racing and Harrison Hoey securing P10. A DNF each in the heat races made for a difficult starting position for the Final but after running at the front all weekend Mathews carded a 5th and Hoey a 9th place finish in the Final on Sunday.

In the KA12 final Jackson Walls placed his Ricciardo Kart 16th in the strongly contested class. Walls showed improved pace over the weekend and great consistency as a driver to finish each of the weekend’s sessions.

The fifth and final round of the Australian Karting Championship takes the Ricciardo Kart Junior Team to Beckley Park Raceway in Victoria on October 30-November 1.