The opening round of the 2017 Rotax Pro Tour season has kicked off with plenty of action in perfect weather conditions at Melbourne’s Todd Road with Ryan Kennedy and Troy Woolston leading the charge in each of the Rotax DD2 categories, while New Zealand’s Madeline Stewart broke through for her first ever Pro Tour win in the Rotax 125 Light (C vs D) heat race.

Queenslander Kennedy (Formula K) has been unstoppable in DD2, putting together one of his smoothest and most dominant Rotax Pro Tour events  – comfortably winning each of the three heats after qualifying on pole this morning. Kiwi Josh Drysdale (GP Kart) and Joshua Fife (Kosmic) are keeping Kennedy honest however, whilst this afternoon, Leigh Nicolaou finally began to look comfortable with his Shamick Racing combination. 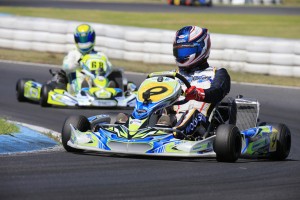 In the DD2 Masters category, local Troy Woolston is the man to beat. He led the Australian team at the World Finals in Italy last year and has romped to three victories. The first two were relatively comfortable however the final heat race he had to work hard for it after being shuffled down the order on the opening corner. He pushed hard to elevate himself in front of Kris Walton – the CompKart-mounted Queenslander also looking particularly strong. Praga chassis pair Danny Wright and Daniel Richert have both had good pace throughout the course of the heat racing, however have lacked some consistency in taking that pace and converting it to a result come the end of the race.

Returning Rotax Light star, Brad Jenner has got his return to the sport off to the ultimate start with three heat race victories aboard his FA Kart. With the category broken into four groups due to entry numbers, Jenner’s only tough assignment came in the final Group A Vs. Group B fight this afternoon when he was pushed by Kosmic racer, Cameron Longmore. This added to Jenner’s provisional pole position then winning the first ever Rotax Pro Tour shootout. Longmore, who is in his first major race since graduating from Juniors, took two heat race wins in his three starts. The big talking point was the performance of the lady racers in Rotax Light. Kiwi Madeline Stewart qualified second and took part in the shootout. She finished the day with an historic heat race win in the third set of heats and secured a second placing in her opening race. Other lady racers to regularly feature in the top 10 included Madeline’s sister Ashleigh, Barbara Anagnostiadis and Tayla Harnas. 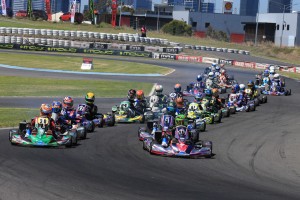 In Junior Max, it has all been about Jay Hanson. The Kosmic racer in his first open Junior race qualified on pole and has been under pressure from the likes of Kade Vink, Jaiden Pope and another New Zealand raider in Jackson Rooney. Despite being smaller in stature and open Junior experience, Hanson has kept his cool to take three hard fought heat race wins.

Rotax Heavy has been a battle in three between local Aaron Hindle (FA Kart), Kris Walton (CompKart) and Chris Farkas (Tony Kart). Hindle took the first heat race victory but Walton struck back with two wins in the second and third 12 lap stanzas. Despite that – all three have been glued to one another throughout the course of the day, less than a second separating them at the conclusion of the heat races, with Farkas keeping the heat race winners honest.

Shamick Racing CRG driver, World Finalist and defending series Champion, James Wharton has proven to be the cream of the crop in Mini Max. Although Will Harper started on the pole, Wharton has been able to charge his way forward to the front. Others to impress include Hugo Simpson who will be among the front runners tomorrow and Jack Westbury. If some luck finds it’s way to him, Sydney-based EVO Kart racer, Adrian Haak will be in the mix as well. 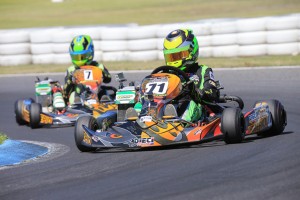 Jonathon Marcusson and Angus Wallace have shared the Junior Max Trophy race wins. Showing the true development format of the all-Intrepid control chassis class, there have been some exciting battles among Marcusson, Wallace and Angus Giffin. Paige Raddatz and Russell Mayo have been having their own tight battles and could be in calculations tomorrow.

The small but spirited Micro Max field has seen Harry Arnett annex three race victories. The battle for the final podium placings have been strong between the likes of Bradley Majman, Kristian Janev – whilst Macka Hazard, Griffin Peebles and Jake Rutkowski have also shown they will be among the fight come the final.

In a major change to promote racing among heat races, points towards Rotax Rankings – which determine Australia’s representatives at the World Finals – this year to be in Portugal in November – are awarded post heat races and after the Finals tomorrow afternoon. If today was any indication, the points standings after this weekend will indeed be interesting.

Tomorrow, racing gets back underway at 9:00am local time with the Pre-Finals before the Finals will bring to a conclusion the Australia Day Celebratory weekend in Melbourne. The big question is – will there be a few Kiwis that upset those celebrations?

You can follow the action by listening in live at www.rotax.com.au/streaming.html right throughout the day; via the Rotax Pro Tour Facebook page (www.facebook.com/rotaxprotour) or through live timing on the Race Monitor Mobile App or at www.race-monitor.com.