LOESKOW LEADS THE WAY AT THE BEND 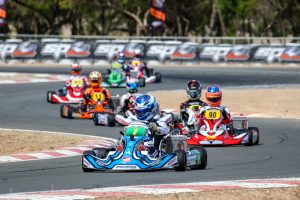 On paper with pole position and three victories it appears Troy Loeskow’s SP Tools Australian Kart Championship Title defence, presented by Castrol EDGE couldn’t have got off to a better start. In reality, it hasn’t been easy for the defending Champion, having to hustle his Ricciardo Kart to the top spot in all three of today’s races at The Bend Motorsport Park in Tailem Bend.

Loeskow set the pole time with ease, which was ominous for his highly credentialed opposition. In race one, young Victorian Anarchy Kartsport racer, Henry Johnstone got the best of the start from the outside front row. It took Loeskow several laps to get his Vortex-powered, Daniel Ricciardo-inspired machine up to optimum speed – which once he did, he got by Johnstone and sailed to the lead.

It looked a carbon copy in heat two with Johnstone making a slick start and once again it took Loeskow a few laps to assert himself on the race. Johnstone fought back immediately and the pair touched, dropping them both down the order.

This sparked a charge in the Bundaberg-born product who then charged his way forward and systematically picked off the opposition, which includes Supercars co-driver/S5000 star, James Golding, to get back to the lead late in the race and win.

Race three and it was Golding who tried to upset the Patrizicorse freight-train by pushing past and taking debutante KZ2 racer, Reece Cohen with him, along with 17-year-old CRG prodigy, Zac Zamprogno who is having his best weekend in KZ2.

Loeskow got the surge on and then picked the combatants off in front of him and then put on a racing clinic, picking off quickest lap after quickest lap, annexing his maximum score for the weekend with the fastest lap on the final lap of the day! 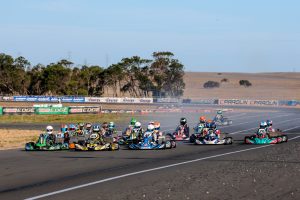 In the elite KA2 Junior class, Sydney-sider Cody Maynes-Rutty has made a successful transition from racing over the Australian summer in Europe by taking three resounding victories from today’s heat races.

With entries over the track limits, Karting Australia officials broke competitors into multiple groups that raced each other in round robin events over the day and the Scuderia PCR driver emerged on top. Others to impress included South Australian driver Jimmy Pisczyk (EVO Kart) along with his team-mate Adrian Haak from Sydney, new Ricciardo Kart recruit, Hugh Barter and Kiwi star Luke Thompson who made his SP Tools Australian Kart Championship debut for new team, N-Zed Motorsport headed up by well-respected former professional driver, Daniel Bray.

Jaiden Pope- who joined the Rush Performance outfit this year has clean swept the first three heats of X30. After walking away from a sizeable road accident in his native Sydney during the week, Pope was outstanding to take the wins throughout the course of today.

Harrison Hoey, moving to a Zedcorse-prepared Parolin chassis this year, was the closest fight that Pope had throughout the day, the young Queenslander pushing Pope hard however could not get one over him in the end.  Aussie Champ, Brad Jenner got a handle on the track and his kart by the end of the day ending heat three second and he will be a threat tomorrow, while Championship newcomer Josh Richmond was strong as were former Junior stars, Zak Lobko and Beau Pronesti on occasion.

Victorian, Leigh Nicolaou stunned the X30 establishment by setting the pole position time in qualifying. Nicolaou is more noted for his heat and finals racing than his qualifying prowess, however it was a well accepted pole for the Shamick Racing driver. He finished the day with three finishes inside the top four – best result of second, which bodes well for a strong finals performance tomorrow.

TaG 125 has been one of the more fascinating classes of the ‘first day back at school’. Featuring a mixture of drivers from the category and other senior categories making the move to TaG, along with a string of new drivers, it has left the day with a number of interesting results. 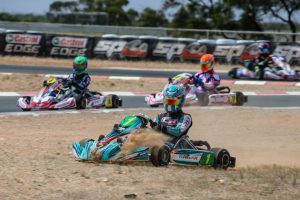 Defending Australian Champion, Adam Lindstrom (Formula K) was an early casualty in heat one while running up front, allowing runner up from the last two years, Cody Brewczynski to take the heat one win on debut in an Arrow kart. Next heat, it was the Sydney-sider to strike trouble, spearing off the track just two corners from the chequered flag, which saw Tyler Howard take the win for TF Race Engines. In the final heat, multiple champ in the category, Brendan Nelson won wearing Exprit colours for the first time with Breczynski and Lindstrom also inside the top four!

A round winner from last year Thomas Cooper, along with Zachary Heard, Chris Bregonje and Tim Colombrita barely blotted their copybook in races that were somewhat frantic at times.

Hayden Crossland has been the pick of the crop in an unusually subdued KA4 Junior today taking two heat race wins and a second placing. The only race he dropped was heat two to his Scuderia PCR team-mate, Alex Ninovic. Ninovic took the fight to Crossland throughout as did Marcus Pisani – who is also in with a big shot come finals tomorrow. Ben Munro and Jesse Lacey have been among the front runners too.

The six KA3 Senior heats held today have been dominated by several drivers. Another category to exceed track limits, they were broken into three groups after timed qualifying.

Benito Montalbano (who has moved to AWC Motorsport Academy), Boost Mobile-backed Oscar Priest, and JC Sport’s Jai Brown have won two heats each throughout the day, the other winner being multiple Australian Champion, Matthew Waters, who won the first heat of the day. Those drivers proved to be the dominant forces regardless of how the groups lined up and have positioned themselves to be at the forefront come tomorrow’s final.

Max Walton has been the pick of the crop in the biggest category by entries in this weekend’s event at The Bend Kart Stadium taking three heat race victories. It hasn’t been easy for the Shamick Racing Parolin driver but he has emerged on top in three of the five heats conducted today. Other winners included Cadel Ambrose (who has been right with the front-runners all day long) and Ryan Tomsett. Impressive performances have come from Tony Kart’s Hunter Salvatore, Tyce Hodge and Luke Trost all who have battled for the lead on occasion.

Basilio Micale is leading the way in Cadet 9, finishing the day with two wins and a fourth. The hard fought category for drivers between 7 and 9 years of age has produced some terrific racing, with Victorian Sera Driver Development pilot, William Calleja winning the first race of the day and ending the other two inside the top four. Dominic Mercuri, Noah Dixon and Noah Enright are challenging for podiums in tomorrow’s final as well.

Tomorrow, action begins at The Bend at 8am Australian Central Summer Time, 8:30am Australian Eastern Daylight Time, 7:30am Queensland and 5:30am Western.

Livestream of all the days action will be broadcast on karting.net.au or on the Australian Kart Championship Facebook page.

Entry to the event at The Bend Motorsport Park, just outside Tailem Bend, SA is free to the public.