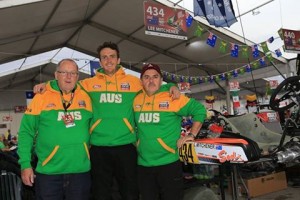 Victorian Lee Mitchener has written his name in karting history with victory at the Rotax MAX Challenge Grand Finals in Sarno, Italy.

Competing in the DD2 Masters class for over 32 year olds, Mitchener shadowed Finnish driver Antti Ollikainen for the majority of the final before making his race-winning move on the final lap.

Mitchener passed Ollikainen on the outside at turn two in a spectacular maneuver to take over the front running and claim the victory.

“I knew that anytime I got near him he was going to block so I had to surprise him. So I just drove my ass off and when he broke early and went to the inside coming into turn two, I made the move,” said Mitchener.

“It was a big move but I had to go for it, I knew he wouldn’t have expected it – especially there.

“This win is the culmination of many years of hard work, not only from myself but also the guys who have been right behind me. None more so than my Dad, Grant and Jace Lindstrom from Pro Karting along with Paul Gallo. 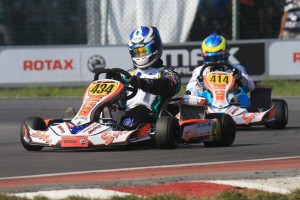 Lee Mitchener on his way to victory in the DD2 Masters class (Pic: Coopers Photography)

“A big thank you to Ian Black, Donald Stevens and the team at International Karting Distributors along with all of the other Australian drivers and team members who have supported each other here in Italy this week.”

Mitchener dedicated the win to his mother who lost her battle with cancer last year.

It is the first time an Australian-born driver has won the event since Tasmanian Ben George was victorious in Portugal during 2006.

Sydneysider Cody Gillis was on track for a podium finish in the Senior MAX class before a last lap incident ended his chances of a spot inside the top three.

Nine of the 14 Australians competing made it through to the finals stage with Hugh Barter and James Wharton finishing 8th and 17th in Mini MAX, Dylan Hollis ninth in Junior MAX and Sebastian Ruiz 30th in Micro MAX. Team Captain Troy Woolston finished 20th.

In an event that saw in excess of 350 competitors representing 50 countries, Australian finished third in the Nations Cup.