LAST LAP PASS LANDS THE WIN FOR LOESKOW IN ADELAIDE 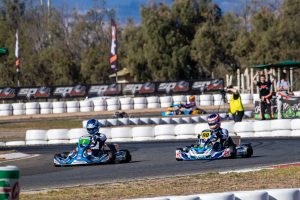 Queenslander Troy Loeskow has joined Pierce Lehane at the top of the SP Tools Australian Kart Championship’s all time round winner’s list on Sunday.

The reigning Australian KZ2 Champion claimed his 11th career victory at Adelaide’s Bolivar Raceway in dramatic circumstances, while Will Power’s Australian Kart team welcomed a number of first time winner’s crested the podium in the third round of the Championship.

Johnstone got the best of the start and opened his race lead to almost a second before Loeskow got into his stride and then set about eating into the lead. The performance from Johnstone was remarkable in itself. Each time the Vortex-powered Loeskow threw a challenge at the Victorian, the TM-powered youngster responded. He held onto the lead and looked like he had it until going defensive at the final corner and Loeskow had the momentum and swept around the outside – his sixth win in the last 10 rounds conducted.

Beau Pronesti converted what had been a stellar weekend into victory having started in 10th placing. The New South Wales driver couldn’t control his emotions after crossing the line taking his first round win in The Australian Kart Championship by 1.2 seconds over South Aussie Tony Kart driver, Jacob Dowson and 18-time Australian Champion, David Sera in his Arrow.

In TaG 125, it was Zachary Heard who got the best of an – up to times – eight kart battle for the round win including Championship frontrunners Brendan Nelson and Cody Brewczynski. He emerged victorious in the end by 0.366 of a second over South Australian Reuben Goodall – who earlier in the day won the heat race after starting at the rear of the grid after not getting his engine started – and another great story in Leigh Nicolaou, who didn’t complete a lap in qualifying on Saturday and started his opening heat races in last place. 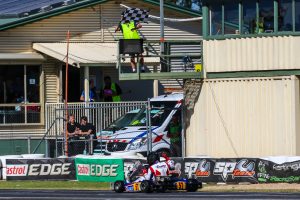 Kurtis Tennant emerged victorious in KA3 Senior to get his first AKC round win since graduating from Juniors. It was a barnstorming battle in the hard fought category for Tennant to get through in his Energy Kart to edge past early race leader Benito Montalbano. James Sera came home in third position.

Jace Matthews kept his lead of the Championship healthy with a strong weekend, finishing in fourth position in front of local female racer, Nikki Watson who came through from starting in the mid-pack.

William Newell secured the sixth KA4 Junior round win in succession for the Scuderia PCR team, making it the 10th win from the last 15 rounds in the category for the yellow and black chassis.

The podium was completed by Championship leader and Newell’s fellow PCR pilot, Alex Ninovic after an incredible weekend long fight in the category.

In one of the best finishes in Australian Kart Championship racing history, James Anagnostiadis took the win in Cadet 12 aboard his Kosmic. The Victorian withstood challenges from a number of competitors all of whom took turns at the race lead. A final lap battle that spreadeagled the field saw Anagnostiadis emerge victorious and competitors second through 11th covered by a second! 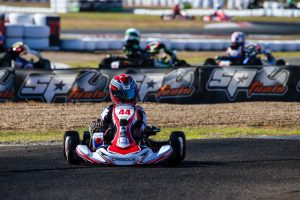 Sebastian Eskandari-Marandi continued his winning ways in Cadet 9. The Queenslander won by 8.6 seconds, remaining undefeated in the last four Australian Kart Championship finals. More impressively, he clean swept the weekend, setting pole position and winning every race. The Parolin pilot put the exclamation mark on that through setting the fastest lap in the final.

Finishing second was Alaster Flack in his Energy and Zack Hilder was third placing another Parolin on the podium.

The KA2 Championship has become wide open after a strange day. The Final got underway with a track blocking pileup that took out 15 of the 33 competitors. But that was only where the drama started!

From the restart, officials adjudicated that a number of competitors had not stuck to the restart procedure and post-race handed out several time infringements to penalise accordingly.

Originally, Costa Toparis had crossed the line first which would have been his first KA2 round victory, however with the penalty applied he dropped to third.

Once the penalties were applied across much of the field, PCR driver, Carter Mobbs was then judged to be the round winner – his second round win of this season, which will push him up the points ladder. Second place went to Kart Republic driver, Peter Bouzinelos and third position Toparis.

Thus completes the third round of the 2021 SP Tools Australian Kart Championship, presented by Castrol EDGE, in so doing taking it past the half way point. The Series is now in hiatus until June 25-27 when it heads to the Puckapunyal track in Seymour, regional Victoria and then will complete in Newcastle on August 27-29.

Full results from the weekend’s competition can be found by CLICKING HERE.