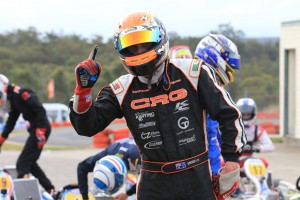 Ensbey was granted the pole after team-mate Jason Pringle watched his perfect weekend evaporate in the third heat this morning. A broken spark plug on Pringle’s #35 saw him pull to the side of the track.

The final saw Ensbey get the best of the start. He was kept honest by Troy Loeskow for much of the early running, while disaster struck again for Pringle – who’s engine blew a big end bearing early in the 25 lap race.

The race for the lead was thrilling – with Ensbey and Loeskow joined by Kel Treseder for the battle. The trio were nose to tail from the middle of the 25-lap final, until three laps from home when Treseder went for the pass on Loeskow but it didn’t pay off.

Ensbey was guaranteed the win from that point on and completed the lights to flag victory and kept his streak of finishing every KZ2 final he’s competed in New South Wales on the podium.

Jaie Robson came home in fourth, which was a great recovery after not starting the third heat. The young Sydneysider stalled on the startline just as the lights went green and was collected by a competitor further back in the pack.

Matthew Nipperess put in a great performance in the final coming from 21st on the grid to record a 14th placed finish.

Unfortunately for Jarryd Ebzery and Matthew Erdmann they didn’t finish the final, however Ebzery showed promise making it into the top 10 in the third heat.

In KA Junior, Zac Crichton put in a great performance to record a fourth placed finish in his first Australian Kart Championship, presented by Jayco and Castrol EDGE final. It was a terrific race that saw Crichton in the top group for the entire event. A crash on the final lap brought out a red flag forcing officials to award the race on the previously completed lap.

Charlotte Poynting was the first Team CRG entry home in KA1. She pushed hard to finish in ninth position, recovering from a scary crash in the opening heat on Saturday. In a class that had two female competitors racing, Charlotte was also the first female home as well.

Peter O’Neill brought his CRG entry home in 13th position, while Brett Robinson didn’t finish the final. Robinson had been in and around the top group throughout the weekend, in what was an impressive performance on return to big time karting. 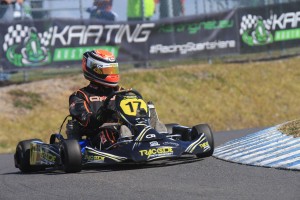 In KA TaG, Rick Pringle finished in 15th. It was a difficult weekend for Pringle, after a tough qualifying he was able to finish all of the heat races in the top 10. His team-mate Troy Stone was unable to finish the final.

Local driver, Liam Ferry was on for a promising result before not finishing the Final in X30.

CRG Chassis and KZ2 specialist, Mattia Madami was buoyed by the strong results by the team.

“Team CRG is excited that Kyle was able to take victory this afternoon,” said Madami. “It was a brilliant race where anything could have happened, so to get the lights to flag win is impressive.

“I feel for Jason (Pringle). He had the perfect weekend underway after yesterday – it was one of his most impressive performances that I certainly have seen. But today was just another day and it didn’t go right – that is motorsport as they say. I think he had the pace to take the fight to the end.

“To get fourth placed finishes for both Zac Crichton and Kai Allen was very pleasing. It was Zac’s first time at this level event and he did such a great job against a very competitive field. Kai is continuing to show promise and is moving forward at every single race meeting.

“Overall the team is happy with the weekend. The competition keeps getting harder and we have to work harder to keep pace with them. Darren (King), myself, Chris (Dell) and the entire team aren’t resting and will continue to push until we get all of the Team CRG drivers into a winning position.”

The next round of the Australian Kart Championships presented by Jayco and Castrol EDGE will be at the Geelong Karting complex over the weekend of October 30-November 1.