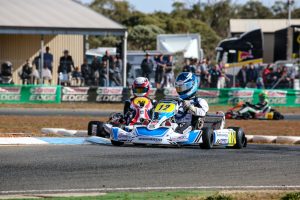 Australia’s best kart racers will be heading to the Central Queensland town of Emerald later this month for the penultimate round of the 2019 SP Tools Australian Kart Championship presented by Castrol EDGE.

The July 21-23 event will see close to 250 competitors converge on the region as they chase the most prestigious Championship in Australian karting.

Among the entry list are drivers from every state of Australia, along with visitors from New Zealand, Sri Lanka and Singapore.

With eight classes being contested, there will be drivers – both male and female – of all ages competing at the event. The youngest drivers will be the Cadet 9 class for drivers aged between 7 and 9 years old through to the elite drivers in the high-speed KZ2 class. It is in this international-level class where competitors will reach speeds in excess of 140 km/h around the world-class Emerald circuit.

The Ricciardo Kart driver secured maximum points at the previous round to open up a 20-point buffer over Gladstone’s Jason Faint in the standings. Gold Coaster Chris Hays is in third place ahead of Garry Rogers Motorsport Supercars driver James Golding.

One of the closest battles in the eight titles that are up for grabs is in the TaG 125 class where the top three drivers are separated by a mere seven points. Sydney CompKart driver Cody Breczynski, who was a narrow runner-up in the 2018 title chase, leads the way ahead of perennial runner-up Adam Lindstrom and multiple-time Champion Brendan Nelson.

Practice will be contested on Friday July 21 ahead of qualifying and heat races from 8am on Saturday July 22. The Finals will be held on Sunday July 23.

The Emerald Karting Club is located on the Capricorn Highway (behind the Ag Grow site). Admission is free for spectators.