KARTING STARS SET TO FLOCK TO THE RIVER CITY NEXT MONTH 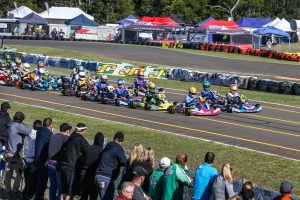 The best kart drivers from the Southern Hemisphere will flock to the Murray Bridge region in South Australia next month for Round Three of the 2019 SP Tools Australian Kart Championship, presented by Castrol EDGE.

The May 17-19 event marks the halfway point in the five-round Championship with more than 275 Competitors set to converge on the River City for the event.

Along with every State and Territory in Australia being represented, there will also be Competitors travelling from New Zealand, Singapore and Sri Lanka to take on Australia’s best.

It is the fifth consecutive year that the Monarto Karting Complex has hosted a round of the prestigious Championship, much to the delight of Rural City of Murray Bridge Mayor Brenton Lewis.

“Over the past four years the Australian Kart Championship, and the Monarto Karting Complex in general, has provided both economic and social benefits to our Community and Region,” he said.

“To have people travel from far and wide to compete at the event and enjoy the hospitality in the Murray Bridge Region is a huge boost for the City.

“We’re proud to be supporting the event and look forward to hosting all of the Teams and Competitors throughout their stay.”

For Go-Kart Club of SA President, Brandon Stillwell, hosting a round of the Australian Kart Championship is an honour for him and his hard-working Committee.

“Hosting a round of the Championship for the fifth year in a row is an honour for the Go-Kart Club of South Australia and one that we’re all looking forward to,” said Stillwell.

“In the past we’ve set a very high standard for the events and we’ll be looking to continually improve for all of our attendees in 2019. We pride ourselves on putting on the best event possible, to ensure both the local and visiting drivers, teams, mechanics and spectators enjoy their time in the Murray Bridge region.

“This year Teams and Competitors will notice a significant change to the facility with a new Out Grid cover being erected to provide some much-needed protection from the weather as they prepare for their races.

“The support shown by the Murray Bridge Community over the past couple of years has been tremendous and we look forward to an even bigger and better event in 2019.”

More than 275 entries have been received for the event across nine classes catering for drivers as young as seven years of age through to the elite KZ2 gearbox class. Practice will be held on Friday May 17 ahead of the qualifying heats on Saturday May 18, with the finals on Sunday May 19.

The Monarto Karting Complex is located at 3711 Old Princess Highway, Monarto. Admission is free for spectators.