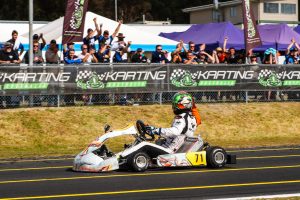 Josh Fife has claimed his second SP Tools KZ2 Australian Kart Championship, presented by Castrol EDGE in Newcastle on Sunday after an epic series of races that saw a three way title fight go right down to the 25 lap final.

Although Fife lead coming into Newcastle, West Aussie Sam Dicker and Jay Coul were staking their claim for the Title this weekend, particularly Dicker in the final heat this morning who showed some blistering pace.

It was former Dunlop Super2 Supercar driver Fife’s smarts in that heat race that saw him amass a decent margin, however that wasn’t unassailable come the final.

Coul did everything he could in the final, becoming the highest placed of the three combatants, finishing third, however Fife’s fourth place was enough to claim the Championship.

Dicker had an early race altercation which dropped him a few places however fought valiantly to come home in sixth position and claim second in the Title.

The Final saw a new winner in Jack Childs, who was pressured all the way by Bailey Sagaidak with Coul completing the top three.

Costa Toparis put in a Champion’s knock to secure his first KA2 Junior Australian Title. He got to the lead early and in the end amassed a 4.174 second advantage to win the round and Championship.

Max Walton finished second in his best KA2 finish and Toby Dvorak moved to second in the Championship by virtue of a third placed finish.

It was tight for much of the final between Dvorak and Peter Bouzinelos – the latter being down the field in the early runnings and ultimately succumbing to a tyre issue after an on-track collision.

TaG 125 was decided on Championship technicalities, where drivers had to drop their worst round pointscores (due to early year Covid restrictions). The race was won by Thomas Gallagher – who claimed third in the Championship, however Zachary Heard eclipsed Leigh Nicolaou for the Title despite finishing one place behind the Victorian.

Testament to the quality of the drivers in the Championship fight, all three finished in the top three. 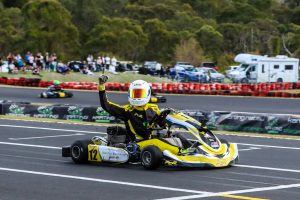 KA3 Senior was another that had the calculators working overtime.

The Championship would be decided between Alex Ninovic and reigning champion, Jace Matthews. After being run wide in the first turn, Ninovic had to fight several places to get on racing terms with Matthews. Matthews ran wide at the bottom of the race circuit and Ninovic was left with nowhere to go and they touched lightly, sending the former down the order.

In the meantime, the battle for third in the Championship was emerging between Benito Montalbano and Jai Brown. Brown started the final third on points, however when Montalbano won the final and Brown finished fourth, the winner claimed third position by a solitary point.

15-year-old Ninovic won the Championship with his second place and Joel McPherson completed the podium.

After Jace Matthews won X30’s title on Saturday, it was all to play for round wins and the event didn’t disappoint. A wild final ultimately saw Jackson Souslin-Harlow take the round win on the final corner.

Late in the race, Gianmarco Pradel took the lead from race long leader, Souslin-Harlow, then the Sydney-sider left it until the last corner to get into the lead. Matthews crossed the line in third position with Tyler Howard coming home fourth after starting midway through the field.

In KA4 Junior, Kobe McInerney completed the perfect weekend with arguably the most dominant win in KA4 history.

After locking up the Title earlier in the day, Patrick Buckley was a non-finisher. Ironically, Buckley and the man he faced off for the Championship, Brodie Norris, came together at the final corner midway through the race, seeing Buckley buried in the sandtrap.

Cadet 12 saw a new winner in Wollongong’s Corey Carson. The second generation racer was a popular victor after fighting hard to not only get to the lead but stave off the challengers that were coming from several suitors.

Cadet 9 produced some of its best racing of 2022 with up to eight competitors in with a shot at taking the final round.

Jensen Damaschino completed an exceptional weekend by taking a win, the 1.9 seconds he won by doesn’t tell the true story of how tight the contest was.

Thus completes what has been an enthralling 2022 SP Tools Australian Kart Championship with preparations already underway for next year’s five round Championship.

The Champions will be celebrated at a Gala Presentation evening at the Newcastle Exhibition and Convention Centre.

Full results from this weekend’s Grand Final in Newcastle are available here.