JOHN PIZARRO RECEIVES MEDAL OF THE ORDER OF AUSTRALIA 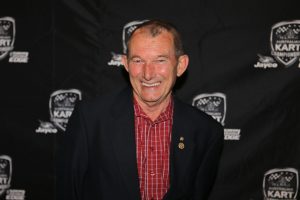 Australian Karting Legend John Pizarro has been awarded the Medal of the Order of Australia (Pic: Coopers Photography)

Australian karting legend John Pizarro has been named on the Queens Birthday Honours List to receive an OAM (Medal of the Order of Australia) as part of this year’s Australia Day celebrations.

The 15-time Australian Champion has been recognised for his service to motor sport, in particular karting, having race on circuits around the world between 1964 to 1995.

“I’m amazed and extremely proud to have received the award,” the 74-year-old said.

Pizarro started racing karts in 1964, aged 19, starting off with a home made kart fitted with a small motorcycle engine.

“I was interested in motorbikes but I heard the injuries were pretty high,” he said.

“So I turned my interest to karts, I was married at the time.”

Once Pizarro had a taste of racing – and winning – there was nothing stopping him.

“I raced to win and I liked winning – that’s why I stayed with karting,” said Pizarro.

After winning his first National Championship at Sunnybank in Queensland at the 1968 event, Pizarro went on to become the most recognisable names in Australian karting with an unmatched record at major events.

Among his highlights was winning the International Championships in Orange in the late 70s and early 80s, taking the race by a whole lap.

Pizarro competed in five World Championships throughout his career, his first appearance coming in 1975 at the Paul Ricard circuit, an event Pizarro describes as a ‘baptism of fire’.

He also competed in the International Team Race in Japan with Gold Coast drivers Graham Powles and Howard Heath in 1978 – his first time racing in Japan and winning it.

Another highlight for Pizarro was being a part of the DAP works team during the 1970s alongside the late great Ayrton Senna and Terry Fullerton, who Pizarro believes is the best kart racer he has ever seen.

Throughout his career, Pizarro raced five times in Hong Kong and New Zealand, twice in France, and in America, Philippines, Japan, Italy, Germany, Portugal and Belgium.

Among his many awards and recognition includes being a 2017 inductee in the Australian Motor Sport Hall of Fame and the Australian Sports Medal in 2000.

“Two years ago I had the privilege of being inducted into the Confederation of Australian Motor Sport Hall of Fame, alongside the likes of the late Sir Jack Brabham, three-times world Formula One champion,” said Pizarro.

“This surely is recognition that karting is a mainstream motor sport.”

Mr Pizarro is also a member of the Parkes Rotary Club, having been involved since 1971, was a former president for two terms and was named a Paul Harris Fellow in 2005.

He also received the Outstanding Service to Rotary Award in 2008 and 2009.

The Australia Day 2019 Honours List is the largest in the history of the Order of Australia, recognising 1127 outstanding and inspirational Australians.