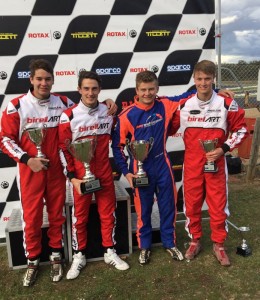 BirelART Australia have achieved four placings inside the top five podium for Rotax Light at the penultimate round of the Pro Tour National Series at Victoria’s Puckapunyal circuit with reigning National Champion Brad Jenner leading the group, taking victory. In addition to that success, podiums were also achieved for the team in Junior Max, DD2 Masters and Rotax Heavy.

Brad Jenner showed promising speed from the outset of the weekend, picking up a string of second place finishes, gradually working his way closer towards victory and subsequently further developing the setup on his BirelART machine. A promising start in the final eventually resulted in Jenner moving to the lead early in the race before pulling away to take the win. The Victorian’s BirelART Australia team mates including Cody Gillis, Nicholas Andrews and Mitchell Maddren all fought hard for a place into the podium with Gillis recording the next best result, picking up second after gradually improving his efforts across the weekend, having started the final in fifth.

A continued improvement across the weekend for Nicholas Andrews showed through in the pre-final, after finishing outside the top five in the heat races, the Queenslander drove through to secure third in the pre-final, thus then picking up fourth in the final. Mitchell Maddren engaged in a tight battle for position throughout the final, on the back of starting 11th, he worked his way to sixth before making a late race pass to secure the final podium placing in fifth.

Another bumper field showed through in Junior Max at Puckapunyal, with 40 drivers lining up for each and every race. Joshua Car experienced some mixed results throughout the heat races, though he managed to come on strong at the business end of the weekend, picking up fourth in the pre-final. A hard fought battle in the final where a spot in the podium was up for grabs amongst almost ten drivers, Car managed to achieve fifth and add to his points in the series tally.

The Puckapunyal event proved to be another successful one for DD2 Masters driver Scott Howard for the Pacific Kartsport team in his BirelART CRY30-RX DD2 Kart, recording third place finishes in all heat races and the pre-final, Howard claimed fourth in the final. In Rotax Heavy, Scott Simpson came away with fifth overall for the weekend.
Steve Macken – Team Principal

“The weekend provided some excellent results for the BirelART Australia team. All of our drivers put in a lot of hard work and effort in the build up to the event at Puckapunyal, including testing and a lot time spent personally preparing for the long races. To come away with four drivers in the top five podium in Rotax Light was an astonishing achievement and to see Joshua (Car), Scott (Howard) and Scott (Simpson) also pick up some silverware, it makes me very proud of how professional and dedicated that all of our drivers are.”

The next major event for BirelART Australia is round four of the Australian Kart Championship that takes place at Newcastle, NSW from 4-6 September.