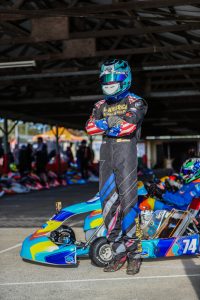 Jace Matthews is the Champion-elect in X30 (Pic: Pace Images)

The fight is still on to crown many of the SP Tools Australian Kart Champions as we head to Grand Final day in Newcastle – including the premier KZ2 gearbox class – however Super Saturday saw a new Australian Champion elect rise in Jace Matthews.

Matthews has the chance to become the first driver in the multi-round Australian Kart Championship era to win two Championships in one year after scoring enough points over out-going Champion, Brad Jenner to claim the X30 Championship. He can also wrap up the KA3 Senior Championship on Sunday, which he leads by a slender margin.

The Gold Coast-based CXR Racing FA Kart driver took pole position and two of the X30 heats, finishing second in the other to have enough points where closest rival – defending Champion, Brad Jenner cannot catch him.

Jenner was battling to dial a setup into his Frost Civil EOS Kart and was behind the eight ball much of the day, succeeding to Matthews.

The closest rival to Matthews was another FA Kart in Jackson Souslin-Harlow, who switched teams between rounds to the Troy Farley Race Engines team. He was the only one to head Jenner and finished behind him in the other two races.

In KA3 Senior, on amended points after Saturday’s three heats, Matthews’ Championship lead has been cut to four points by PCR’s Alex Ninovic, who led up until the last round. Ninovic – who lives not far away from the Newcastle circuit – won the opening three heats, with Matthews crossing the line in third, seventh and fifth respectively.

It has been a day full of drama in the elite KZ2 category. WPK (Will Power Kart) Jack Childs set the pace in qualifying before SodiKart’s Bailey Sagaidak won heat one, he all crossed the line first in that third heat.

West Australian, Sam Dicker has fought valiantly to keep himself in the fight this weekend.  He ultimately enters tomorrow still within striking distance of Championship leader, Joshua Fife ahead of Sunday’s final day. 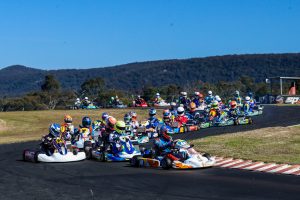 It is advantage Costa Toparis heading into tomorrow’s final day despite a penalty after his first heat and a fourth placed finish after a collision. He put on a superb drive to win his final heat.

Other heats were won by a rapid Toby Dvorak, Jack Webster, Lewis Francis and Toby Spinks had his best KA2 day with two heat race wins.

Mathematically, Peter Bouzinelos is still in contention despite finding trouble in the final heat and a DNF by Jake Rutkowski in his final heat has all but ended his chances.

Zachary Heard is intent on taking his battle with Leigh Nicolaou to the wire in the TaG 125 class after an outstanding day on Saturday. He won two heats and finished second behind Mark Tulloch in the third.

Victorian Nicolaou’s day saw him finish fifth, seventh and fourth respectively, but as history shows, Nicolaou brings a big game Sunday and with a title on the line it will be closely run.

In KA4 Junior, Patrick Buckley is in the box seat to take his maiden Australian Championship after a grafting day for both he and closest rival, Brodie Norris.

Buckley has largely played a smart game amassing points where he can, however Norris has had no choice but to throw caution to the wind and it caught up with him in the third heat going off track. He was able to get back on and finish the race but lost many points off where he had been running.

Kobe McInerney dominated taking all three heat races and Xavier Avrimedes was very much his closest rival pushing him all the way. 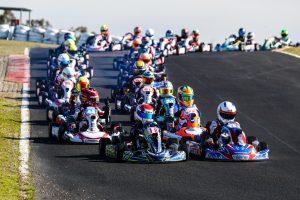 Cadet 12 has seen Alaster Flack in tremendous form taking two races on Saturday and Basilio Micale the other. Champion elect, Sebastian Eskandari-Marandi hasn’t let them too far out of his sites however and will be certainly in the mix to end his second consecutive Cadet Championship with a round win.

Oscar Haddon has been solid in an entertaining Cadet 9 set of heats. He has nailed all three of the heat races, but the racing has been fair but fierce. Jack Larsen has shown some great pace throughout the day as has Blake Haigh, Jay Kostecki and Sebastian Tander. Despite dropping down the order in one of his heats, Jensen Damaschino is right up amongst it. The final is anyone’s tomorrow with anywhere between eight or 10 karts in the hunt.

The grand finals of the SP Tools Australian Kart Championship, presented by Castrol EDGE will come to a conclusion tomorrow at the Mount Sugarloaf Raceway, 5 Cameron Park Drive,  Cameron Park – adjacent to the M1 Motorway.

Entry is free or you can catch all the action live at www.mysportlive.tv.