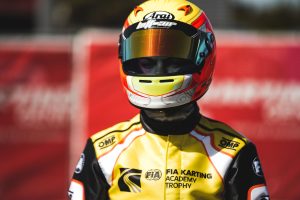 Australian teenager Harry Arnett has qualified 16th at Round Two of the FIA Karting Academy Trophy event in Italy.

The third-generation racer is Australia’s representative in the one-make Series that sees 53 drivers representing their country, along with one young female driver Chiara Battig representing the FIA ​​Women in Motorsport Commission.

Arnett’s time of 49.094 was 9th fastest in his group and only 0.681 seconds behind the overall fastest set by Columbian driver Mattias Orjuela.

Arnett’s first two heat heat races will be held at 6:30pm (AEDT) on Saturday and 12:05am Sunday.  He will then contest his final heat at 6:05pm on Sunday ahead of the final featuring the top 36 drivers in the standings at 9:25pm.

Also being contested at the same event is the second round of the European KZ and KZ2 Championship where Australian drivers former Australian Champion Josh Fife will make his debut in the elite KZ class and Henry Johnstone will be competing in the 83-strong field of KZ2 competitors.  Fife qualified 27th in the field of 31 before claiming 25th in his opening heat race, Johnstone was 43rd fastest in qualifying and recorded a 24th place finish in his opening heat.

Further information surrounding the event, including the event schedule, can be found https://www.fiakarting.com/event/2022-cremona/guide