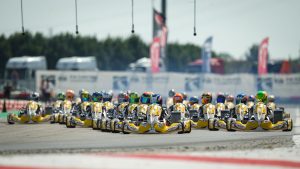 Victorian Harry Arnett is one of 54 drivers competing in the opening round of the 2022 FIA Karting Academy this weekend (Pic: FIA Karting)

Victorian Teenager Harry Arnett will be flying the Australian flag when the 2022 FIA Karting Academy Trophy kicks off in Genk, Belgium.

The 14 year-old will be one of 54 drivers representing their country in the three round series that sees the drivers line up in identical equipment supplied by the OTK Kart Group.

Each of the young drivers have been nominated by their National Sporting Authority (ASN) to represent their country.

“To be selected as Australia’s representative is a real honour and I’ll be taking in the experience while working hard to achieve some good results across the three rounds,” said Arnett.

“All of the tracks are new to me, so I’ll need to learn very quickly to get up to speed but with a good group of people around me I’m confident and really looking forward to the challenge.”

In the opening practice sessions on Thursday, Arnett posted the ninth fastest time of the day, a mere 0.187 seconds behind the fastest driver Filipino Wendell Go.

Qualifying will be contested on Friday ahead of the heat races on Saturday and the final on Sunday.

Also being contested at the same event is the opening round of the European KZ and KZ2 Championship where Australian driver Henry Johnstone will be competing in the 89-strong field of KZ2 competitors.

Further information surrounding the event, including the event schedule, can be found https://www.fiakarting.com/event/2022-genk/guide