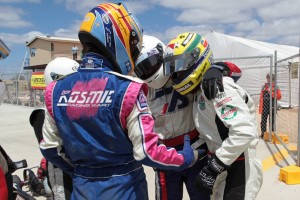 Lining up alongside the best young drivers in the country, including reigning national champion Joseph Mawson, in the Junior Clubman category the 14 year-old took advantage of every opportunity over the closing laps of the championship final to charge his way from ninth place to victory over the final two laps.

In one of the toughest and closest races seen for many years, the top ten positions were exchanged corner after corner with Mawson, Cairns youngster Aidan Wright along with South Australian hopefuls Todd Hazelwood and Simon Hodge were battling for the win.

With a lap and a half remaining Anton DePasquale, who had charged from 20th on the grid, spun out of third place after coming together with Wright, then Mawson and Hodge came together two corners from home while squabbling for the race lead.

As the leaders fell away Gutierrez, who’s racing idol is the late, great, Ayrton Senna, squeezed his way through to emerge from the carnage as the race leader and steal an emotional victory.

“It’s just an amazing feeling, I could see karts going in all directions as they were racing pretty hard near the front of the field,” said Gutierrez, who’s middle name is Nigel after the former World Formula One Champion Nigel Mansell.

“This is my first state championship, I’ve been racing for seven years and been trying so hard to get the win. Now I can say that I’m a state champion – it’s awesome.

“I had a lot of luck on my side, there was a couple of times there when I thought I was going to be taken out but somehow I snuck my way through into the lead with half a lap remaining.

“Coming out of the final corner I looked back and saw that I had a few kart lengths lead and I knew the win was mine.” 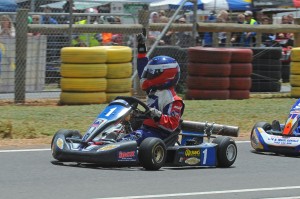 Tyler Morrison crossing the line for victory in the Rookies category. Pic: KartX/Budd

Angle Vale youngster Tyler Morrison won his second state championship in a matter of months in the Rookies category. Morrison, a second-generation racer, won the Western Australian championship in Perth last month and also took the win today ahead of Victorian Reece Sidebottom.

Athelstone’s Todd Hazelwood added another state championship to his ever-growing resume when he crossed the line ahead of Victorian Mason Thomas in the Junior National Heavy category.

Upper Sturt youngster Chase Wooley won the battle of the youngest drivers in attendance in the Midgets category for while Danny Errigo took out the Clubman Super Heavy category.

Race Notes:
Polesitter Luke Marquis elected to start on the outside of the front row and got the jump off the start line before Brad Jenner passed him for the lead at the end of the opening lap.

Jenner showed superior speed to open a gap over the field in the slippery conditions aboard his CC Racing Arrow kart in the opening few laps. Damon Strongman and Joseph Burton-Harris had their own battle for the minor placings while Jenner strengthened his grip on the race lead to take a comprehensive victory.

Marquis title hopes were virtually dashed when he had to avoid a spinning competitor during the early laps dropping him outside the top ten.

Race Notes:
On a drying track all competitors in the Clubman Over 40s category elected to start on slick tyres, however, the slippery conditions, a drying track, caught out seven drivers on the opening lap in two separate incidents.

Remo Luciani was pressured early in the race by Trevor Whitby before showing superior speed to clear off to claim the 52nd state crown of his career.

Race Notes:
Tony Kart driver Lee Mitchener started from the third row on the grid but it wasn’t long before the national champion leapt into lead ahead of Michael Griffiths and local driver Paul Pittam.

Local driver Scott Taylor made it a four-way battle for the front running. Griffiths made a move for the lead midway through the race on a track that was completely dry only to have Mitchener fight back a couple of laps later.

Mitchener appeared to have the upper hand but when he ran wide coming onto the main straight with two laps remaining it allowed Griffith an opportunity to move into the lead in his Kosmic kart. Mitchener made a last lap pass for the lead but was unable to hold onto the win as Griffith regained the lead to cross the line one kart length clear of Mitchener.

Race Notes:
Victorian Justin Francis got the jump at the start but it wasn’t long before Joseph Mawson asserted his dominance on the race.

The Arrow pilot showed true class to dominate the 16-lap final and claim his tenth state championship. Behind him Joseph Burton-Harris and Mitchell Gee were engaged in a hard fought battle for second and third position. Gee made a last corner pass to regain second place, while Burton-Harris crossed the line backwards in third place after spinning when he was run wide exiting the final turn.

As the race progressed De Maio pulled clear of Jones and closed in on the race leader. With a handful of laps remaining De Maio took over the front running aboard his CC Racing Intrepid kart, Lindstrom fought back shortly after before the duo had a hard fought battle over the final two laps which saw De Maio take a narrow victory.

Race Notes:
In a frantic start to the final of the Leopard Light category Tony Kart’s Grant Smith led the field away ahead of local drivers Josh Tynan and Matt Hall while John Grother, who was dropped down the order on lap one, and Tyson Pearce were charging from the back on the field.

With four laps remaining Grother got to the front and despite heavy pressure from Tynan over the final few laps the Tracksa-backed pilot held on for the victory.

Pearce, Smith and Royce Nott were battling hard for the final spot on the podium. Unfortunately for Pearce, he exited the race in spectacular fashion after coming together with Smith through the high-speed turn one. The end result was Pearce finishing upside down on the exit of the turn.

Race Notes:
National champion Shayne Piper got the jump off the start line to lead a five-kart freight train at the front of the field for the final of Clubman Heavy.

On lap four Leigh Nicolaou took over the front-running before Lee Mitchener moved to the front a lap later. Piper was forced off the circuit on lap seven before spinning as he re-entered the circuit putting him out of the running.

With five laps remaining Remo Luciani relieved Lee Mitchener of the race lead, as the pair battled it allowed the following quartet, led by Shay Mayes, to close.

Mitchener and Luciani had a small coming together in turn one which resulted in Mitchener running off the circuit and dropping to sixth. Mayes took advantage opportunity to take over the race lead.

After a close battled in the final stages Mayes benefited from Luciani running wide midway through the final lap to take his second state championship.

Nicolaou and Pittam had a coming together in the final corner that resulted in Nicolaou coming off the track.

Race Notes:
A starting light malfunction led to the Junior National Heavy field being returned to the pit area. At the same time pole sitter Jordan Nicolaou encountered a clutch issue and despite the best effort by the team he was unable to make the restart.

Anton DePasquale got the jump off the start line to show local driver Todd Hazelwood the way.

DePasquale came to a halt with snapped chain on lap six allowing Hazelwood to take over the lead. Behind the leader there was a three-way battled between Aidan James, Mason Thomas and the hard charging Teagan Osborne.

While Hazelwood went on to claim a comprehensive victory ahead of Thomas and Osborne, who held off local driver Jake Spokes for third place.

Race Notes:
Local driver Rhys Wooley got the jump from the outside of the front row in the final of the Rookies category but it wasn’t long before multiple-time state champion Reece Sidebottom moved into the lead.

Kustom Karts pilot Tyler Morrison made it a three way battle at the front with the trio running in close proximity for much of the race.

Morrison took over the front running with a few laps remaining and withstood some intense pressure from Sidebottom over the final two laps before crossing the line for his second state championship in as many months.

Race Notes:
While the heat races were close fought affairs, the final turned into a Paul Rodgers benefit with the CC Racing Intrepid pilot showing the field a clean pair of heels to take the victory.

CRG driver Rick Pringle was pressured midway through the race by local driver Blake Mooney but in the end it was Pringle who held on for the runner-up placing.

Race Notes:
Tony Kart’s Aidan Wright got the jump off the outside of the front row while polesitter Joseph Mawson was shuffled back to fifth spot on the opening lap.

Mawson made his way past local drivers Todd Hazelwood and Simon Hodge before setting out after the race leader, by mid race distance Mawson found a way past Wright for the race lead.

It then became a battle corner after corner with the top six drivers exchanging positions on a regular basis. In what was a bit of a blur over the final stages with Mawson, DePasquale – who had charged from the back of the field to be inside the top three – and Simon Hodge all failing to finish courtesy of separate incidents.

With two laps remaining George Gutierrez was ninth before steering clear of the carnage to cross the line ahead of Thomas Randle and Wright.

Race Notes:
The previous race in Junior Clubman set the standard for a fanatic finish to the South Australian Championships and the drivers at the front of the Midgets category continued the script.

After numerous lead changes, Chase Wooley was leading the way with two laps to go closely followed by Dylan Hollis, however, when Alexander Peroni and Hollis had a touch it allowed Wooley to open a race winning lead.

Wooley crossed the line clear of Peroni and Brock Kenny, who led the way mid-race for a number of laps.

Blake Mooney was running in third place during the middle stages of the races before a mechanical issue forced him onto the sidelines.

Errigo made his way past the Kosmic kart of Brooker with one and a half laps remaining before claiming the win by half a kart-length.

Race Notes:
South Australian Matthew Panella led the way in the early laps of the Clubman Light final, only to be caught by Cian Fothergill midway through the race.

The leading duo were joined by local driver Alex Baker to make it a three way battle for the front, however, when Panella encountered a mechanical issue it ended his chances at victory.

Over the closing stages Baker closed in on Fothergill for the race lead but when the pair got together on the final lap it allowed Shayne Piper to sneak through and claim the win.