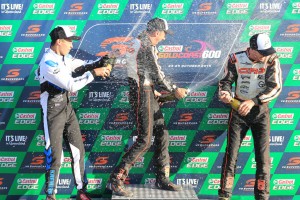 Davide Fore has produced one of the drives of his career in difficult circumstances to win his second Race of Stars Surfboard on the Gold Coast, Team CRG Australia occupying three of the top five placings in KZ2.

The five-time World Karting Champion was racing with a heavy heart following the passing of his Nonna, which he received news on just before qualifying on Friday.

He had to work hard for the victory as his fellow Team CRG pilot, Kyle Ensbey produced the best drive in his long career. Ensbey led for much of the race, with Fore performing daring side by side manoeuvres heading into turn one at 160kph.

Each time, Ensbey would not be denied.

The move came with a few laps to go but Ensbey stuck with the 41-year-old Italian legend before dropping back behind young Dutchman Marijn Kremers on the final lap. Jaie Robson was able to bring his CRG home in fourth – showing the pace that he has in recent rounds of the Australian Championship. Matt Erdmann brought his machine home in 13th, while Jarryd Ebzery was tied up in a first lap skirmish.

“I cannot thank the team enough for keeping me motivated and ensuring my focus on this race,” said Fore. “It has been a very tough weekend for me, but I am so happy to have got the second Race of Stars win here, it has been a wonderful weekend for CRG here in Australia. I dedicate this race to my Nonna, who I love very much and she has always pushed my career.”

He also vowed to return to make it three in a row.

“If I am invited back I will absolutely love to come back and make it a third win, for sure.” 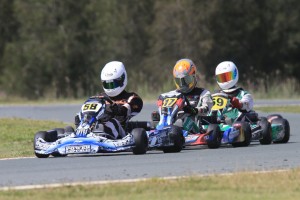 James Litzow (front) on his way to victory in KA1 for CRG. (Pic: Coopers Photography)

Queenslander James Litzow took his CRG to victory lane in KA1 after huge battle with fellow CRG pilot, Brett Robinson. The pair touched on several occasions and were lucky to continue on in the race. Litzow was able to break clear and hunt down the runaway leader to take the win.

Peter O’Neill was also in the race and he brought his ailing #40 home in fourth of the Masters category following an early race incident which dislodged his Nassau panel.

The KA12 category netted a top 10 finish for both Shamick Racing’s James Wharton and Adrian Haak. Haak showed some good pace, whilst Wharton’s good form of late under the tutelage of David Sera continued to show.

In KA Junior, Zac Chrichton was once again impressive. The CRG pilot brought his kart home seventh in a race where the top three where covered by five-one-hundredths of a second.

CRG Australia Team Principal, Christopher Dell was elated with the result of the Race of Stars.

“What a memorable day for the entire Team CRG outfit,” Dell said. “The team really had to rally around Davide with the horrible news he received on Friday and I couldn’t be prouder of how they went about their business and kept him focused.

“The KZ2 final was an epic and Kyle Ensbey literally left nothing on the table – he threw everything at Davide and nearly got him. For Jaie Robson to come home fourth after a few issues throughout the course of the weekend just continues to show how good he is in this category.

“Three out of the top four placings is exceptional for Team CRG.

“To also get a surfboard with James Litzow and taking two podium places in KA1 was awesome. James had to work hard for it.

“We’re very happy with all of our drivers from throughout the weekend and our Juniors were amazing in how they soaked up as much as they possibly could from Davide.

“It has been a pleasure having him in Australia once again and we would love to have him back again next year to make it three in a row – but now we are sending our thoughts to his family at this time.”

The next major event for Team CRG will be the final round of the Australian Kart Championship presented by Jayco and Castrol EDGE in Geelong over the weekend of October 30, 31 and November 1.