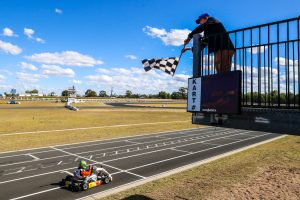 Josh Fife has taken the lead of the KZ2 standings in the 2022 SP Tools Australian Kart Championship after an almost perfect weekend at the penultimate round of the series at Emerald in Central Queensland.

The former Champion dominated the 25-lap final on Sunday afternoon in the Championship presented by Castrol EDGE.

The only four points that the Kart Republic driver dropped all weekend were in qualifying and when he finished a heat race in second on Saturday afternoon, while problems befell other title aspirants.

Henry Johnstone had one of his best weekends in his KZ2 career finishing a strong second in this afternoon’s final. The BirelART driver had no answer for Fife, but both drivers were the class of the field.

KZ2 Championship leader coming into the weekend, Jay Coul was the benefactor of an early race skirmish between Johnstone and last round winner Sam Dicker. He was able to take several places and get himself into third position.

He had the speed to pull away and complete the podium, keeping him in the hunt heading to the final round in Newcastle.

Subway Supercars racer, James Golding – who was effectively second on points entering the weekend – pulled out of the final in the early runnings which, coupled with a non-finish in heat one yesterday, has compromised his Championship chances.

In the premier junior category, KA2 Peter Bouzinelos was able to break through for his first victory in the category. 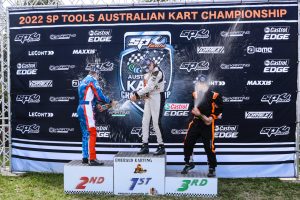 He was dominant right throughout the race and didn’t look like being headed.

Saturday’s pole sitter, Jack Webster put in a storming drive to come home second. The West Aussie worked his way up the field and was in a spirited fight with South Australian Ben Holliday, who had one of his best KA2 weekends.

Holliday was elevated to the podium after Queenslander, Mika Lemasurier received a post-race two place technical infringement dropping him to fifth. This elevated Championship leader coming into the weekend Costa Toparis to fourth placing.

Jace Matthews had a solid weekend finishing on the podium in the two categories he contested.

His X30 fight with defending champion, Brad Jenner will go to the final round after Matthews took victory in his FA Kart and Jenner dropped to sixth place after leading a portion of the race.

Jaiden Pope fired through to finish second after what had been to that point a quiet weekend by his standard and South Australian, Jacob Dowson completed the podium after an entertaining run to get by Jenner, a storming Jackson Souslin-Harlow and Tyler Howard – who had an impressive weekend in debuting the Lando Norris kart.

Matthews finished second in KA3 Senior despite being the dominant force throughout the weekend.

Returning to the top step of the podium was Jai Brown – who took the Charles Leclerc kart to its first round win in the SP Tools Australian Kart Championship.

Lachlan Platten scored his first ever AKC podium after what had been a solid weekend, completing a Queensland trifecta.

Championship leader, Alex Ninovic had a difficult day, dropping well down the order in heat four after being collected accidentally by James Sera while in the top three, then in the final a lap one incident dropped him deep in the pack. He was able to drive his PCR through to finish in 12th position and is hoping for better on his home circuit of Newcastle next month. 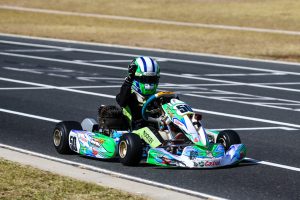 Castrol-backed Patrick Buckley got himself into Title contention by taking the win in KA4 Junior. It was the perfect weekend for the Queenslander not being defeated in any race and taking the final by 3.7 seconds.

Brodie Norris kept himself in the battle with a solid second placed finish and Sam March pushed through to get himself on the podium, continuing his stellar 2022 form.

In TaG 125, Zachary Heard rode an emotional rollercoaster to win the final. He started the opening two heats last after getting just one lap in during qualifying. He blistered his way forward to quickly get to the front and ultimately took a comfortable victory, crossing the line 2.2 seconds in front of Declan Matthews.

Championship leader, Leigh Nicolaou drove a sensible race in his Parolin to come home fourth, while his closest rival coming into the weekend, Thomas Gallagher ended up seventh.

The Cadet classes saw familiar names walk away with a big haul of points as both those Championships are almost as good as being resolved.

In Cadet 12, Sebastian Eskandari-Marandi was shuffled down the order on the first lap after starting on pole and had to fight forward from eighth position. He wound his way to the front past New Zealander, Marco Manson and was not bothered for the remainder of the race.

Manson wouldn’t finish the race pulling out with four laps remaining while in the chase for the podium. Hamish Campbell came home in second position, while Basilio Micale fought through for third. 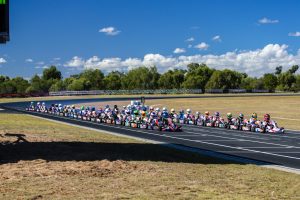 The Cadet 12 field about to launch into their final in Emerald (Pic: Pace Images)

Cruz Kelly is in the box seat to claim the Cadet 9 Championship next month, the Tecno kart racer taking all but one heat race and the final by 7.2 seconds. Jack Larsen scored his first AKC podium with a great race to second. Larsen finished a mere 0.004 seconds ahead of Jay Kostecki, who continued his good run of form lately continued as the West Australian completed the podium.

Just one round of the SP Tools Australian Kart Championship, presented by Castrol EDGE remains which will take place at the Mount Sugarloaf circuit just outside Newcastle over the weekend of August 19-21 and the Champions will be crowned at the annual gala dinner on the Sunday night.

On demand coverage of this weekend’s action is available at www.watchmysportlive.tv or through the link at karting.net.au.

Full results from the weekend’s action are available through MyLaps Speedhive at https://speedhive.mylaps.com/Events/2016218

The weekend at Emerald didn’t disappoint with many Championship permutations taking place setting up for a thrilling conclusion to the SP Tools Australian Kart Championship, presented by Castrol EDGE.