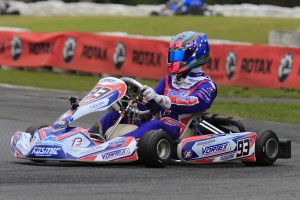 Broc Feeney on his way to posting the fastest time in the top five shootout (Pic: Coopers Photography)

Two Australian Juniors were up against a barrage of New Zealanders in the Junior Max Top 5 Shootout this afternoon, at Round 4 of the Rotax Pro Tour in Coffs Harbour, however it was Queenslander Broc Feeney who overcame the challenge to set the pole time.

The 14-year-old Queenslander had a nervous wait while Upper Hut (NZ) racer, Ryan Wood was the last driver against the clock. Wood managed third quickest from his time against the clock leaving the front row lockout for ‘Team Australia’ and last round winner, Harrison Hoey. Starting fourth in tomorrow’s heats will be round two winner, Rianna O’Meara-Hunt and Samuel Wright completed the top five.

DD2 Masters is shaping as a titanic battle between the two drivers that raced off for last round’s race win. Last round winner, Troy Woolston stole the pole position from Kris Walton after the chequered flag – in a similar fashion to how he took the win at Ipswich just a few weeks ago.

Wollongong based racer, Cody Gillis edged experienced Queenslander, Ryan Kennedy in the DD2 category for the pole position. Josh Drysdale will line up in position three with Nathan Tigani from four – disappointed in his performance but aiming for more tomorrow. 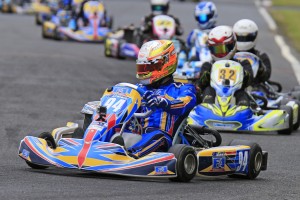 Bradley Jenner is aiming for three from four round victories this weekend in Rotax Light and the chase started well with pole in the category. He will have Queenslander, Ben Jurczak line up alongside with Cameron Longmore and Rhys Astley on the second row.

Series leader, Russell Mayo earnt the pole in Junior Max Trophy, but the real surprise is who will join him on the front row in Jackson Souslin-Harlow. He edged past season long front runners Angus Wallace and Jonathan Marcusson to be at the front in his category debut.

In Mini Max, Queenslander Jack Westbury set the pole time over Sydneysider Adrian Haak, whilst regular front-runners James Wharton and Hugh Barter right behind vowing to keep them in check.

Micro Max Series leader Jake Rutkowski has some work to do after qualifying in seventh position. His nearest rival in the Rotax Rankings Series points, Harry Arnett secured pole position yet again, edging Jordan Ensbey and Kristian Janev, whilst Max Walton ended the session in an impressive fourth placing.

Tomorrow, racing at the Coffs Harbour Kart Club at 211 Phil Hawthorne Drive begins at 8am with all heats and pre-finals being completed before Sunday Finals will be conducted.

Live Timing can be found at race-monitor.com and Live Commentary at www.rotax.com.au/streaming.html