FAST AND FRANTIC ACTION IN ADELAIDE 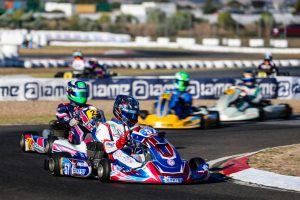 The action was thick and fast in the KA3 Senior class (Pic: Pace Images)

Battle lines have been drawn in a wild day of competition at round two of the SP Tools Australian Kart Championship, presented by Castrol EDGE at Bolivar Raceway in South Australia.

Friday’s qualifying saw positions separated in most categories within hundredths of a second always indicated that the racing was going to be hard fought – and that proved to be the case.

The KA3 Championship leaders, Alex Ninovic and Jai Brown showed in the heat they clashed the fight was on for the title. The duo touched around four times throughout the course of the race which included multiple lead changes. It was ultimately decided in favour of Brown, but Ninovic took three heat race wins. Other winners included Jace Matthews and Robert Graham who took his maiden SP Tools Championship heat race win.

Benito Montalbano looked to get his Championship back on track with some solid performances and will be a contender tomorrow as will James Sera. Kurtis Tennant and Nicholas Sacco, who were in the mix for much of the day too.

Peter Bouzinelos had two heat wins of the four conducted in the elite junior KA2 category. The second of those was initially taken by Jenson Burns, however he received a post race penalty. Other winners were Toby Dvorak (who would go on to not finish his second heat) and Max Walton.

Queenslander, Jack Wells was impressive as was frontrunner Lewis Francis.

On Friday afternoon, Mika Lemasurier took his maiden KA2 pole position, the Queenslander visibly emotional as he pulled into the pit area.

Troy Loeskow made a fightback in KZ2 setting the pole position and winning the first heat. Young EVO Kart star, Adrian Haak got the second heat race win, with Loeskow dropping to third.

Championship leader coming into the weekend, Cody Gillis has speed in his Will Power Kart but like many was in the middle of some frantic front of field action.

South Australian driver, Cooper Brown qualified on pole and took a heat race win – a first for him in the AKC. Leigh Nicolaou has been on the pace right from qualifying – taking a heat win and being in the front group, the other heat falling the way of Declan Matthews, who is tough as always.

KA4 Junior was shaping up as an all Queensland fight between the top pair – last round winner and Championship leader, Patrick Buckley and Brodie Norris.

The pair shared heat race wins with the other finishing behind, both races involving up to six karts in battle at times.

It was the third race though that could change the shape of the Championship this weekend.

In the early stages, Buckley got shuffled back in the order on several occasions, putting him deep in the pack. Up front, Norris was embroiled in a battle with Benjamin Munro.

This ultimately went pear-shaped with the pair colliding on the second to last lap in dramatic circumstances in the final corner.

This opened the door for Victorian James Anagnostiadis – in category debut – to come through for the win. It was a bright lining after qualifying in 14th position yesterday and sets him nicely for finals day. 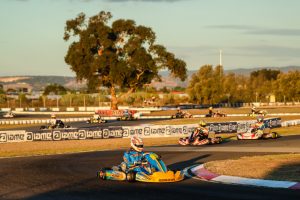 Eskandari-Marandi had recorded two wins, but received a post-race penalty in one of them.

Cadet 9 saw Cruz Kelly take all three heat races – however there is a struck match between several of them.

The main combatant has been Championship leader Jackson Brasher, however that hasn’t reflected the results with Sebastian Tander, Blake Haigh and Jay Kostecki also separating the pair on occasions.

Further heat racing takes place on Sunday morning with the culmination of the weekend being the round two finals.

Entry to the Southern Go Kart Club on Summer Road (around 40 minutes from Adelaide city) is free to the public, with action starting at 8am.

The livestream can be subscribed to at http://www.watchmysportlive.tv/?campaign=karting