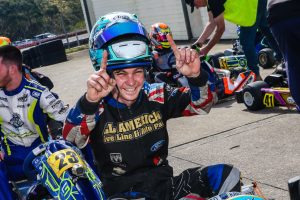 With James Courtney being victorious in the corresponding event in 1997, this weekend’s event marks 25 years since Australia’s last victory at the FIA World Karting Championship.

For Matthews, it will be his second tilt at a World Championship and he is excited about the challenge following his most successful year in Australian karting.

“I’ve had some great results this year in Australia culminating in the X30 Australian Championship and finishing runner-up in the KA3 Senior class, now I’m excited to test myself against the best in the world this weekend,” said Matthews, who joins the Kart Republic team for this weekend’s event.

“Since arriving here last week I’ve already learnt so much and look forward to achieving a good result while gaining some great experience along the way.”

In the junior ranks, where Courtney was also victorious in the corresponding event in 1995, it will be Australian Kart Championship Runner-up Toby Dvorak, Jaxson and Jenson Burns, Max Walton and Brad Majman.  There will be 111 drivers vying for the 36 places in the final.

Six of the eight Australian drivers will be competing under the Shamick Racing Europe banner, owned by Australian Shane Wharton.

The event kicks off today with practice ahead of qualifying and the opening round of heats on Friday before continuing across the weekend.  The top 72 drivers in the intermediate classification will transfer into the Super Heat on Sunday morning (local time) ahead of the highest 36 in the standings earning a start on the Championship Final.

For further information on the event please visit https://www.fiakarting.com/event/2022-sarno/guide