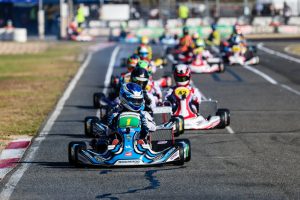 Round of the 2021 SP Tools Australian Kart Championship presented by Castrol EDGE is now scheduled for December 10-12 (Pic: Pace Images)

Karting Australia advises of the intention to complete a fourth round of the 2021 SP Tools Australian Kart Championship presented by Castrol EDGE on December 10-12.

The fourth round will see the Championship conclude for the year with the final standings decided across the eight classes.

The final standings will be based on a Driver’s highest three point scoring events from the four rounds held throughout the year.

While the date is set, the venue for the final round is still to be decided and is heavily dependent on the restrictions imposed on travel and venue capacities by various State Governments.

“This year has been just as challenging, if not more challenging than last year as we have battled through the various restrictions and snap lockdowns that have been enforced,” said Karting Australia Chief Executive Officer Kelvin O’Reilly.

“Our intention is to finish the Australian Kart Championship off with a successful fourth round and crown the Champions for 2021.  Based on the information from the various government departments that we have been provided with, it is anticipated that the current travel and venue restrictions will be sufficiently eased by early December to allow us to complete a successful round.”

All Drivers that were previously entered in the postponed fourth round, and have not requested a refund, remain in the Karting Australia Entry System.  Once the venue for the re-scheduled event is confirmed, amended Supplementary Regulations will be issued and entries will be re-opened in the system.

Drivers who have pre-entered for all five rounds of the Championship will soon receive a partial refund of their entry fee representing the reduction of the numbers of rounds to be contested.