DAY OF DOMINANCE AS AUSTRALIAN KART CHAMPS HEAT UP EMERALD 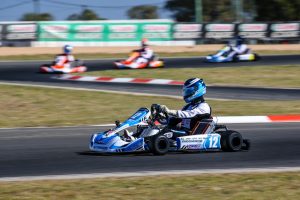 Bundaberg’s Troy Loeskow and Bendigo’s Harry Arnett have both cut dominant figures in their respective categories at the fourth round of the SP Tools Australian Kart Championships presented by Castrol EDGE in Emerald, Central Queensland.

Loeskow’s run of form in the KZ2 Gearbox category saw him tear around the 1.006km circuit taking the pole position and all three heat races aboard his Vortex-powered Ricciardo Kart. It is eight straight race wins for Loeskow having dominated the previous round.

Meantime, after entering this weekend second on the points table, defending Australian Cadet 12 Champion Arnett kept his Championship hopes alive taking all three heat races aboard his A1 Engines Kosmic.

Alex Ninovic – the Cadet 12 Championship leader coming to the penultimate round –  didn’t set a time aboard his CRG chassis in qualifying and was forced to start the first two heats from 39th position. On both occasions he rocketed through the field and finished the third heat in fourth, setting up for a fascinating finals day tomorrow.

KA2 Junior is delicately poised with Championship leader Luke Pink having a mixed day. The Praga pilot has been on the pace, however a last lap incident in heat two shuffled him down the order slightly. He made amends in the final heat taking the win. South Aussie Jimmy Piszcyk scored his second pole position in successive rounds for EVO Kart. He wasn’t able to convert to race wins, however, the opening two heats going the way of Arrow’s Fletcher Harris – who is locked in a fight for the Championship – and Parolin’s young star – Ethan Feather – who is racing with a heavy heart after the passing of his grandfather during the week.

Tyler Howard has been in terrific form in his Troy Farley Race Engines Exprit, setting the pole time for TaG 125 in qualifying and taking the first heat race. Last up winner, Thomas Cooper has taken a heat race win and Adam Lindstrom has kept the chance of taking the Australian Title that has eluded his illustrious family alive with a third heat race win in his Formula K.

KA4 Championship leader, Kobi Williams is doing everything in his power to maintain his series lead heading to the final round after setting pole position and winning two heats. He’s been locked in a battle with closest Championship rival, AWC Motorsport Academy’s Hugh Barter and Kurtis Tennant among others. Barter took the honours in the third heat today and has proven to be a Sunday specialist, winning two rounds and finishing as runner up to Williams in the other.

KA3 Senior has been entertaining throughout the day. Tony Kart’s Joel McPherson got his first ever AKC Pole position and then the heats were shared between three drivers – Championship leader, Jack Bell, Oscar Priest and Benito Montalbano – all of whom figure prominently in the Championship points chase.

Marc Tulloch was the pace setter in X30 qualifying aboard his Arrow chassis, taking pole and then the first heat race. Sydney-sider Jackson Souslin-Harlow took heat two while Championship leader, Bradley Jenner struck with two corners to go in the final heat race to take the win, which has positioned the Arrow pilot well for tomorrow.

Cadet 9 saw another Bundaberg flyer in Ky Burke set the pole time and then take two heat race wins in his Scott Burke Electrical Energy, meantime, Isaac McNeill became a new name on the winner’s list after taking his Tony Kart to first position in the second heat.

Tomorrow, action gets back underway at 8am with the final round of heats and then the all important finals. With just one round after Emerald remaining, it is crunch time for the competitors at the top of the points tables.

Entry to the Emerald Karting Club at Lot 2, Capricorn Highway (adjacent to the location of the Emerald Farm & Field Days) is free to spectators.

A free livestream of Sunday’s action at the fourth round of the SP Tools Australian Kart Championship, presented by Castrol EDGE will be available at www.karting.net.au or on www.facebook.com/australiankartchampionship.