CLUB RACERS SET TO CONVERGE ON MURRAY BRIDGE IN NOVEMBER 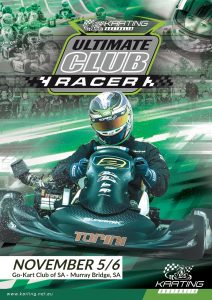 The Go-Kart Club of South Australia’s Monarto Karting Complex will be the scene of the Ultimate Club Racer event this November.

The event, specifically designed for the ‘Club Racer’, will be contested across the weekend of November 5/6 around the 1020-metre circuit located just outside of Murray Bridge.

The winners will carry the title of the ‘Ultimate Club Racer’ for the following year and will have the opportunity to wear a silver number plate in their Class.

Incorporated into the event will be a Teams State of Origin race, where two drivers from each state will be nominated to represent their state in the battle across a variety of classes.  This Teams Race was one of the highlights of the inaugural event in 2019 and is set to be even bigger this year.

“The inaugural Ultimate Club Racer event was an incredible event with Club-level drivers coming from all across the country to compete in an event that has been designed specifically for them,” said Karting Australia Chief Operating Officer Lee Hanatschek.

“They are the drivers who are the backbone of Australian karting with their own event is something that we are very excited about.

“While the Supplementary Regulations are still to be finalised, all regular Club Day Classes will be catered for – including the popular 4SS classes.”

It is expected that more than 200 drivers, along with their families and support crews, will converge on the region for the event, bringing a significant economic impact for the Murray Bridge region.

To be eligible to compete in the event, Drivers are to have Competed or Officiated in a minimum of three (3) Club, Zonal or State Series/Trophy level Events sanctioned by Karting Australia prior to the close of entries.

Further details, regulations and information on prizes will be published in the coming months.