CHAMPIONS AND NEW DRIVERS COME TO THE FORE IN MELBOURNE 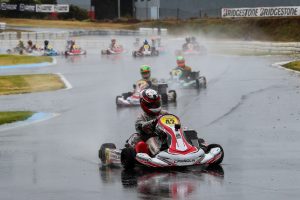 Round Two of the 2021 SP Tools Australian Kart Championship presented by Castrol EDGE fired into action in Melbourne today in mixed weather conditions.

Close to 300 competitors from around Australia turned out in the eight classes and it was hectic from the outset with mid event wet weather playing havoc.

In the elite Gearbox class, KZ2, Jay Coul set the pace in qualifying. He was one of three first time heat winners, sharing the heats with Henry Johnstone and Mitchell Mackay.

In the elite Junior category KA2, Championship leader, Jordan Shalala set the pace in qualifying and took out heat three in what has been a frantic affair. The wet weather started falling during KA2 heat two, with all drivers on slicks, this caused more than half the field to crash out.

In a case of history repeating itself, the heavily wet conditions in heat three saw a litany of drivers watching from the sidelines.

The driver with more Australian Karting Titles than any other, David Sera has made a successful return to SP Tools AKC competition rounding his day off with a heat win in X30. 2019 and defending Champion, Brad Jenner has been the pace of the field setting the pole time and winning the opening two races.

Another returning veteran to taste victory this afternoon was Matthew Wall in TaG 125. In what is shaping as anyone’s game for the Round win tomorrow, Hamish Fitzsimmons set the pole and shared heat race wins with Wall and Cody Brewczynski. Championship leader heading into the weekend, Brendan Nelson has been in the thick of the action also. 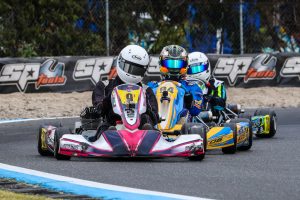 The KA3 Senior class features more than 50 drivers vying for the 36 spots in tomorrow’s final.

In KA4 Junior – Benjamin Munro – who was second in the Championship heading to Todd Road cracked the fastest time in qualifying and is in a tense battle with a number of drivers – including Championship leader Alex Ninovic who won two of the three heats held today, the other going the way of Munro.

In the over-subscribed Cadet 12 field, Jenson Burns bookended the day with Pole Position and a heat race win. Title leader, Ky Burke snared the opening heat, but had trouble in the last race of the day, dropping down the order after a collision. It was a similar story for James Anagnostiadis – taking a win and not finishing the last heat and Lewis Cordato gave the family a double celebration today taking the second heat race.

The full results can be found on the MYLAPS Speedhive website and App with Sunday’s live stream beginning at 8am local time (AEDT) on the Karting Australia website (www.karting.net.au) and the Australian Kart Championship Facebook pages.

Entry to the event at the Todd Road Karting Complex, off the Westgate Bridge, Port Melbourne is free to spectators with a Covid safe limit of 1000 attendees being adhered to and monitored by both the Go Kart Club of Victoria and Karting Australia.